Following their performance at Field Day last weekend, MONEY have just released a short film for ‘Goodnight London’, a fictional piece of art-house cinema, directed by Jem Goulding. Inspired by the confused identity talked about in singer Jamie Lee’s lyrics, the film is a metaphor on the masks we are often forced to wear, embodied in an abstract love story. Like many an art-house films it also has a French flavour, with the story’s lead character played by Parisian rising star Olivier Barthelemy, who found fame starring alongside Vincent Cassel in cult films such ‘Sheitan’ and ‘Our Day Will Come’. 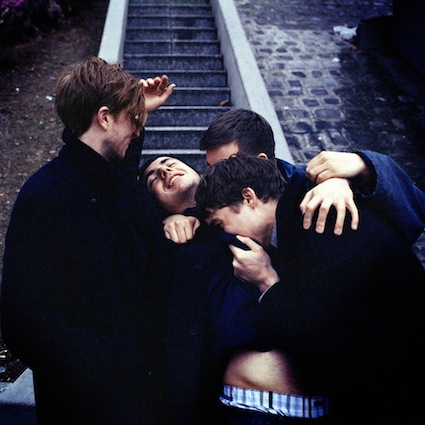 The film remains true to Goulding’s storytelling, finding beauty and sadness in stories of the human heart – a subject that Goulding explores in her best known poem ‘CITY’ written about the brutality of New York. This was the poem that bought Lee and Goulding together, realising that ‘City’ and ‘Goodnight London’ were inspired by the same kind of isolation; whether the city be NYC or indeed, London. Over a first rendezvous Lee asked Goulding to “make some good art” for their song Goodnight London. To find out more about Jem Goulding’s work visit her website.

MONEY are Jamie Lee, Charlie Cocksedge, Billy Byron and Scott Beaman. Having formed in Manchester amidst a prolific underground milieu, they soon came to embody the passion, creativity and optimism of a new generation of artists and musicians who found themselves presented with what singer/frontman Jamie describes as ‘an extraordinary, poetic city’. Their debut album album The Shadow Of Heaven consists of ten songs that range from stripped-back piano ballads such as ‘Goodnight London’ and ‘Black’ to the more epic ‘Hold Me Forever’ and ‘Bluebell Fields’. Rooted in universal themes of the spirit, love and loss, the album also addresses man’s condition in the modern world, issues ‘such as isolation and mental health as logical reactions to it’, says Jamie. It’s an album full of yearning and soul-searching, a voyage of (non-) discovery that only ends up finding itself and the sheer, aching beauty of questions asked in full knowledge of their own answerlessness. It’s metaphysics for the modern age, which might not be quite as spiritually bankrupt and bereft of meaning as we once believed.

MONEY have just announced a US tour to celebrate the US release of their debut LP “The Shadow of Heaven” on Bella Union Records.