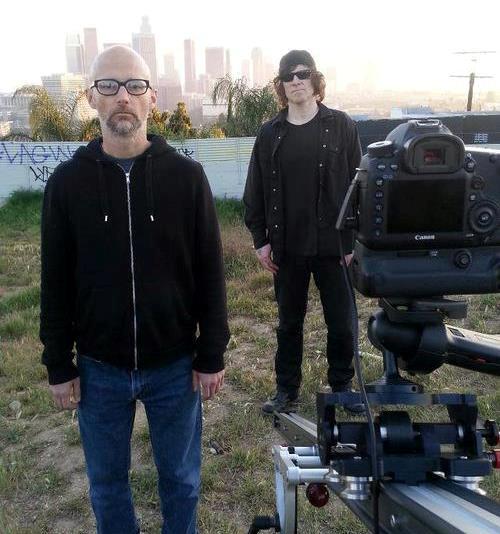 Today, Moby and Mark Lanegan have unveiled the time-lapse video for “The Lonely Night”, available on limited edition 7″ released for this year’s Record Store Day, April 20.

Directed by LA-based cinematographer Colin Rich, ‘The Lonely Night” captures California as never seen before – flitting between the desolate and far removed terrain of the Mojave desert and the endless city expanse of Los Angeles.

Rich says: “With every project I undertake, there are certain emotional undertones that need to be translated into moving image and ‘Lonely Night’ provided to me a thematic of isolation and solitude and so I attempted to create a reflective temporal voyage from ruin and desolation into the edge of civilization and back again. The project took me on my own voyage across the deserts of California, from the ruinous rotted landscapes of the Salton Sea, through the seemingly endless expanse of the Mojave Desert, and to the electric edges of Los Angeles.”

Moby was introduced to Rich’s work a few years back and immediately “fell in love with how slow and beautiful it was”.

Moby says of his involvement with Rich: “I’m really excited to have an experimental music video from this great video artist, and I feel like the slow, rich, and languorous desert visuals fit the song perfectly.”

‘The Lonely Night’ 7” is released on this year’s Record Store Day, April 20th and comes backed with a remix from electronic music legend Photek.

Moby on collaborating with Mark Lanegan: “I’ve been a fan of Mark’s from his early SST Records days, and I’ve always wanted to work with him. He has one of the best and most distinctive voices of the last 25 years. Now that we live near each other it ended up being really easy working on a song together.”