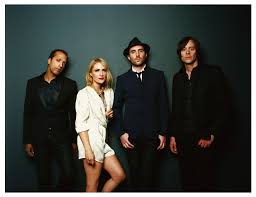 Today, Metric have shared the video for their brand new song “Cascades,” from upcoming album Pagans in Vegas. The LP, which is set for release on September 18 via the band’s own label MMI. Metric is also confirmed as Imagine Dragons’  special guests on a run of North American dates starting June 3, with headlining dates coming soon—see the full tour itinerary and track listing below.

Pagans in Vegas will be the first of two albums from Metric, with the second album expected in 2016. Their time spent writing in 2014—guitarist/producer James Shaw at his studio in Toronto, delving into the CS80 synth and frontwoman Emily Haines with acoustic instruments in Nicaragua and Spain—yielded an unprecedented amount of material that revealed itself across at least two major musical veins. Realizing they had composed enough music for two very different albums, they decided to let each collection of songs stand on their own. More details on the second release will be announced soon.

Metric’s new album is packed with reverent references to artists who’ve inspired them, from Depeche Mode to Joy Division and Underworld. Haines explains that it was about finding “the romance of another time without falling into nostalgia.” This concept is encapsulated on the album cover, which features a shot of Memphis’ Hotel Chisca, the spot where Elvis Presley did his first broadcast interview. “The songs that made it onto Pagans in Vegas weren’t written with an overarching concept in mind,” says Shaw. “Synthetica was about the battle between what’s human, what’s artificial and integrating technology into our lives,” explains Haines. “With this record we were making music for the joy of it…we tried to be as bold as possible,” says Shaw, “all we want is to feel like all we got didn’t cost us everything, even if we never win.” Of the album’s title, Shaw sees it as an apt meditation on “people with a conscience, for better or worse, playing around in the arena of unconscionable behavior.”