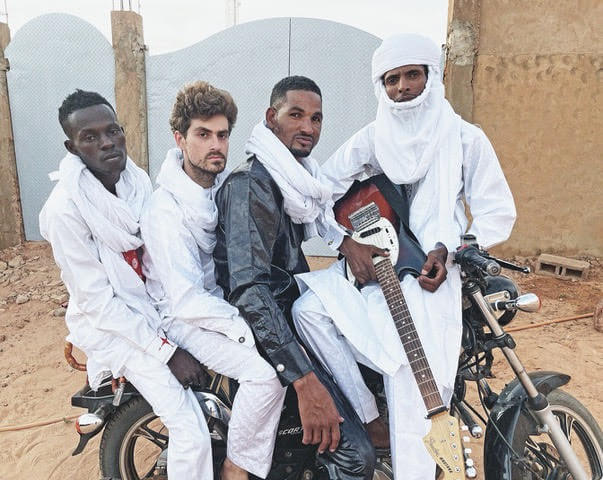 Mdou Moctar will release their nw LP Afrique Victime on May 21, via Matador Records. Recently, the group gave fans a taste of the album, with a video for “Tala Tannam.” The words mean your tears,” says Mdou. “It is another love song of which I’m very fond.”

The clip was filmed in Niamey, Niger last year when bassist Mikey Coltun made the long journey to meet his bandmates and begin prep for the album’s release. “While the song talks about love, we wanted to show the love between friendships and the love of Niger,” says Coltun. “The video includes friends and family –in the Tuareg community in villages around Niamey as well as Hausa people from villages in the Dosso region.”

Mdou recently appeared on Off White’s “Imaginary TV” channel, with designer Virgil Abloh calling the guitarist, “one of my favorite musicians Rn.”

Mdou’s home is Agadez, a desert village in rural Niger. Inspired by traditional Tuareg melodies and YouTube videos of Eddie Van Halen’s six string techniques, he mastered the guitar and created his own burning style. A born charismatic, Mdou went on to tell his story as an aspiring artist by writing, producing, and starring in the first Tuareg language film: a remake of Purple Rain called Akounak Tedalat Taha Tazoughai – which translates to “Rain The Color Of Blue With A Little Red In It” – winning the approval of his family and his community. The word and the sound travelled across West Africa via mobile phone data cards, a popular form of local music distribution. Grueling DIY world tours and albums on the independent US label Sahel Sounds followed, including 2019’s Ilana: The Creator.

Afrique Victime is result of the combined efforts of Mdou and the members of the band that shares his name. His crucial collaborator is Ahmoudou Madassane, who’s been his rhythm guitarist since 2008. Their two guitars are an alchemical combination. As a songwriter, producer, and recording artist Ahmoudou is the premier musical ambassador to Tuaregs in Niger ­– empowering young musicians with instruments, recording opportunities, and visas. Masassane helped form the revolutionary first woman-fronted Tuareg guitar band Les Filles De Illighadad.

Producer and bassist Mikey Coltun flies 20 hours from Brooklyn, NYC, then takes a 28-hour bus ride to reach Agadez so the band can practice and record. With no support from a major label or a manager, they made this journey out of Niger every time they toured. In the past three years, Mikey’s played over 500 shows on three continents as Mdou Moctar’s bassist, road manager, producer/recording engineer, and friend. Coltun recorded and produced Afrique Victime around the band’s travels in 2019 ­– working in studios, apartments, hotel rooms, venue backstages, and in field recordings in Niger.

“From prison to Nobel prize. They ceded to Mandela / Africa is a victim of so many crimes / If we stay silent it will be the end of us / Why is this happening? “Moctar asks on the title track. “I want the world to know that we are making music to promote world peace and be with everyone on the same level, fighting against racism”, he says. “All colors and genders are equal. Women, men and children all suffer in the desert due to the colonization by France and therefore there is a lack of the basics – hospitals, drinking water, schools.”

The needs of Agadez are a major part of what drives Moctar as an artist and promoting the region’s youth through music is an especially personal cause. “I know what it’s like to have been in that position,” he says, “to not have the support of your family, or the money for guitars or strings, it’s really hard. I have a lot of support from the younger generation, because I help them out a lot. When I get back from tour, I give them gear that I bought while I was away so they can go out and form their own bands.”

Says Coltun: “In Agadez the music and feeling at Tuareg weddings is exactly like the best of Western DIY/Punk shows. It’s loud, energetic and powerful. There is a sense of everyone helping out. Tuaregs are a tight community. If you’re Tuareg you’re considered family.”