Mclusky Are Back And In Fine Form 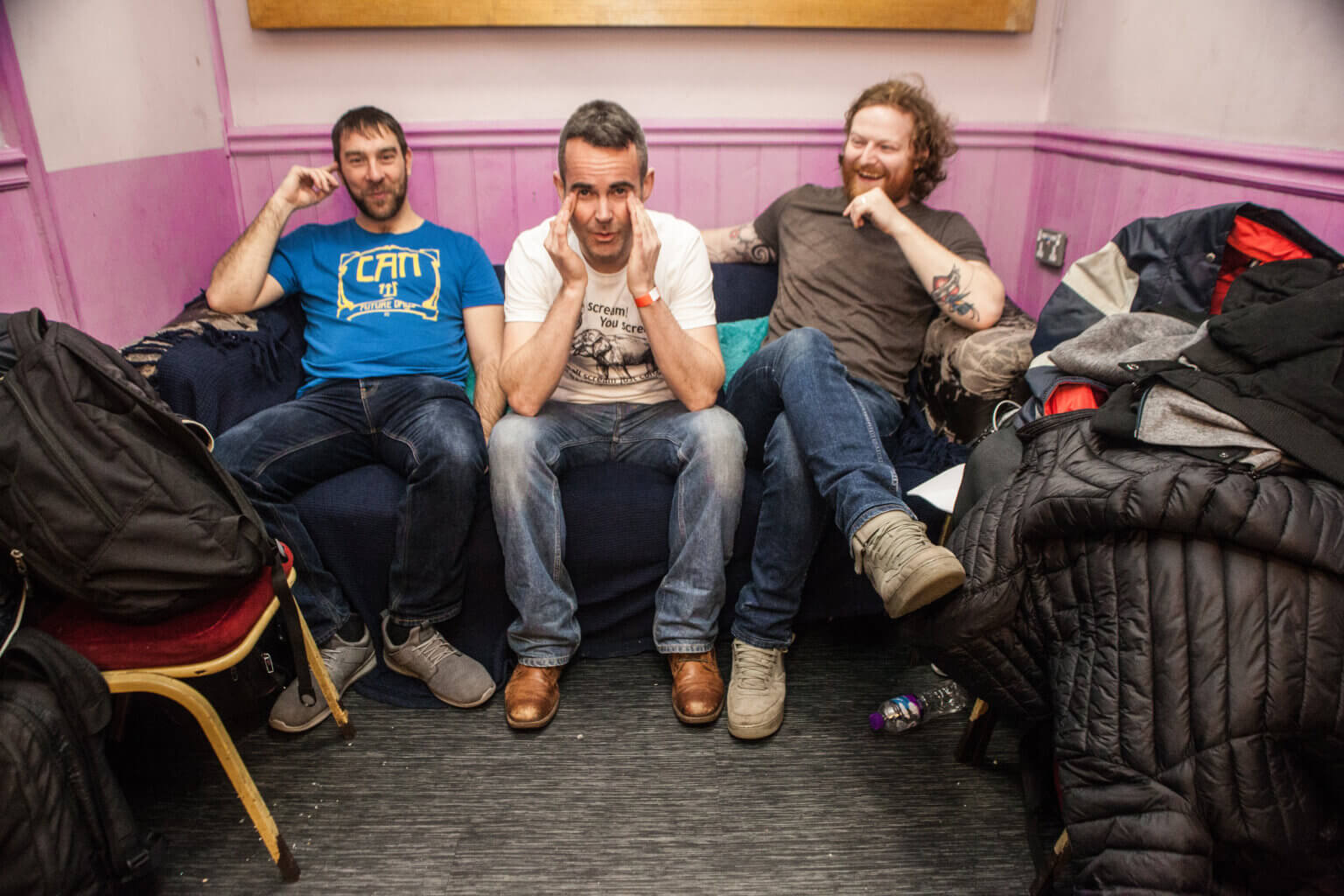 10 years is a long time in music and when it’s nearly doubled it can seem like an eternity. After close to two decades away, Cardiff, Wales post-hardcore power trio Mclusky have finally returned to the North American side of the Atlantic to do some shows. That’s also not the sole reason for guitar & vocalist Andy “Falco” Falkous, drummer Jack Egglestone and bassist & vocalist Damien Sayell to be celebrating due to this year also marking the 20 year anniversary of their seminal sophomore album Mclusky Do Dallas. The band is gearing up to play some more shows around the continent before the end of the year and so far the reaction among fans has been great. It makes for an exciting outlook for Falkous, Egglestone and Sayell going into 2023.

The band is gearing up to play some more shows around the continent before the end of the year and so far the reaction among fans has been great. It makes for an exciting outlook for Falkous, Egglestone and Sayell going into 2023.

Falkous and I recently had a talk about the recent shows the band has done, working in the studio with Steve Albini, his thoughts on streaming services and looking to be more creative during the next year.

Northern Transmissions: Mclusky had their first string of North American tour dates in 18 years that finished up at the Rickshaw Theatre in Vancouver on September 22nd with more shows in the continent happening later this month into December. How was it being back in this part of the world after such a long time for the band? Were the audiences more animated than usual?

Andy “Falco” Falkous: It was great, just from the novelty of not having been there for such a long time, eating good food with bad cheese and seeing the wider streets. Sometimes the crowds weren’t as energetic because they were ages 21 and over, in Britain it’s 18 and over but as long as you don’t look 12 you can probably sneak in. When you got kids in the front it always makes for a great energy that spreads through the crowd and the best shows usually have the biggest range of people in terms of ages. “The reactions were great, especially in L.A where it was fantastic, it was really good fun.”, it was really good fun. We don’t do it enough to go through the motions, it’s still like a little bit of a holiday for us so the reactions were just spine-tingling.

NT: That’s great to hear. What was the experience like working with Steve Albini on Mclusky Do Dallas? Has he had any influence on the band’s music? I can see some similarities between Mclusky’s music and what Steve has done with Big Black and Shellac.

AF: Maybe now, not back then. To be honest, I wasn’t that familiar. I’ve never really been much of a rock historian, I just like the stuff that I like and I’m not a completist. I don’t really know about bands and personalities and I don’t usually read interviews. I obviously knew who he was but I wasn’t versed in anything more than the band I was in, which sounds like the Pixies sped up with bits of Nirvana.

So many people would tell us that we sounded like The Jesus Lizard or whatever and then when we listened to those bands we could see where that translates. I wasn’t so much influenced but he’s done some of the best loud guitar stuff ever and working with him was just really easy. I was 27 and it was the first time in my life I went into an environment and I felt totally at home while working with professionals who were focused on one particular goal. I slept properly because I felt very much at home in an artistic sense.

NT: I can totally understand why, that’s what I’ve heard about Steve from other bands and musicians that have worked with him. He provides a very calming atmosphere in the studio which is really great to hear.

AF: The role of the engineer is to record and obviously record the sounds but it’s also about putting the band in the right headspace to record as well. With Steve, it was all about capturing our performance and when everybody is pissed off the performance might have a certain energy but the best bands are the ones who get into a room together and lay it down. When you inject a happy feeling, you get happy results even if the song doesn’t sound particularly that way.

NT: Over the years since the album’s release, a lot of people have considered it to be a masterpiece and/or one of the most underrated punk albums of all-time along with bands such as Bully, Fight Like Apes and Japandroids covering songs off of it. What are your thoughts on the legacy of Mclusky Do Dallas and did you have any feeling that something special was happening when the album was being created?

AF: For me, when we were making it I thought it was the best record I’d ever made but then again it was only the second record I’d ever made so I never really thought about it in those terms. I’ve always wanted to be in the best band but I never wanted to be in the biggest band because there’s a conflict between those two positions. If you want to be in the biggest band, you have to lose the rough edges and you have to do certain particular things in a particular way which isn’t what I’m interested in doing. With that record, I knew that it was really good and it was really direct. Apart from one song “Clique Application Form”, which is kind of a mess-on, it’s a very focused kind of record.

It was never a thing where we all sat down and went “It’s gotta be like this”, they were just the songs that we happened to write at the time and we wrote tons of songs back then. I think during the rehearsal before we went to record we wrote seven songs, it was ludicrous and one of those incredibly fertile periods. Why has it resonated the way it has? I don’t know but it probably resonates with people who were of a particular age when they first heard it. I reckon that between the ages of 19 and 23, the music that hits you then is the music that probably stays with you for the rest of your life for one reason or another. I think we’re probably seeing a lot of musicians who musically came of age when that record came out, that’s my suspicion anyway.

You can hear some great bands when you’re 35, but during your early 20s it’s a crucial time to discover something that’s really special to you. Also, in reflection I think that it’s a really good record and I can’t really find much at fault. There’s maybe one or two things with the mix I would change now with the guitar but to have a record after so many years I feel that way about it probably means that it’s really fuckin’ good.

NT: I couldn’t agree more, I’m a fan of the record myself. You’ve been very vocal for a long time against illegal music downloading and these days industry types like to think of streaming services like Spotify, Tidal and others as a way to circumvent that from happening even though these services pay a fraction of a penny per stream. What are your thoughts on streaming services and their effect on the artist’s or band’s music when it comes to the payback they’re getting?

AF: I think that if I was being very naive, I would say that if you got a Spotify or whatever kind of subscription and you’re using it to augment the way you listen to music then it’s very difficult to see what the problem is. In that case, it’s just part of the ecosystem of listening to your favorite bands but I think ultimately that becomes the only way people listen unless they’re vinyl fetishists. I try to make anything I listen to something I’ll also buy, but sometimes it is easy to have all of that stuff on hand in the kitchen when your kid is there. When you got a five year old yapping around on the floor, you don’t necessarily want to run and get a Devo LP on the record player so there is a convenience but it’s just a question of not getting caught up in it.

If people don’t put their money towards the kind of music that doesn’t sit easily in the mainstream, then a lot of the artists who make that kind of music will find it to be more difficult to do so because of an overall lack of funds. At the size that we do it, Mclusky can just about make some money but it’s not the amount you can buy a house with. There’s a lot of bands out there who should get to make music without necessarily feeling the pressure to be successful because a lot of value gets taken away for the sake of money. I don’t know how I feel about Spotify, but getting annoyed with it on one level is like getting annoyed with water for being wet. It’s more of a question of working from that position and at least making people aware of the consequences of primarily using a streaming site instead of investing in the ecosystem of the band.

NT: That’s a good perspective to have on it. After the last leg of this North American tour with Mclusky, what are your plans for next year? Do you plan on working on new music with either Mclusky, Future of the Left or your Christian Fitness solo project?

AF: There’s an Australian tour starting in 2023 with Mclusky and afterwards the plan is to work on new music. Whether that’s Mclusky, Future of the Left or Christian Fitness, it’s been a year and I’ve dealt with some family stuff along with some heavy administrative band stuff so I’m hoping next year it can be more on the creative side of the endeavor. Having said that, the shows we’ve recently done have just been great and the crowds seemed as excited as we were excited to play which is just fantastic.