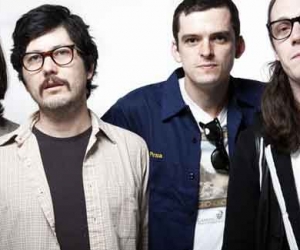 Blurring the line between static and moving imagery, Mazes’ new video for ‘Bodies’ is a disconcerting watch. The single was released digitally this week via FatCat Records, and the video, directed by Austin of Vision Fortune, reflects the band’s recent shift from fast, thrashy pop into the considered body of work that is their new record, Ores and Minerals. Austin says of the video:

“The idea of the video came from the idea that we as humans are inevitably attracted to both moving image and still imagery such as photography and painting. The video explores and raises questions about the parallels between these two mediums: we see the subjects sitting as still as possible for these ‘video’ portraits, subtle nuances appear on closer inspection as we the audience see eyes blinking and twitching.”

The album draws from a much broader palette than the band’s debut; utilizing repetitive loops and samples, playing up a rhythm section that could walk into any recording session by The Fall and feel comfortable, honing an expansive loose guitar sound and all the while retaining that unmistakable knack with melody.

Of the album, the band’s Jack Cooper says, “We set about trying to make a record that was far more original and broader than the first one… a representation of all the things that inspired us rather than a small portion. We began writing with us in mind…playing to our strengths. “Bodies” was the first song…like most of the album written to repetitive loops and drones. The demo had an Arthur Russell drum loop because it sounded how Neil drums so I guess that’s where we were at. Without saying ‘there’s always been a dance element to our music’, I think we wanted to write songs that people might be able to move to, if the mood was to take them and there’s something incredibly satisfying in repetition.”