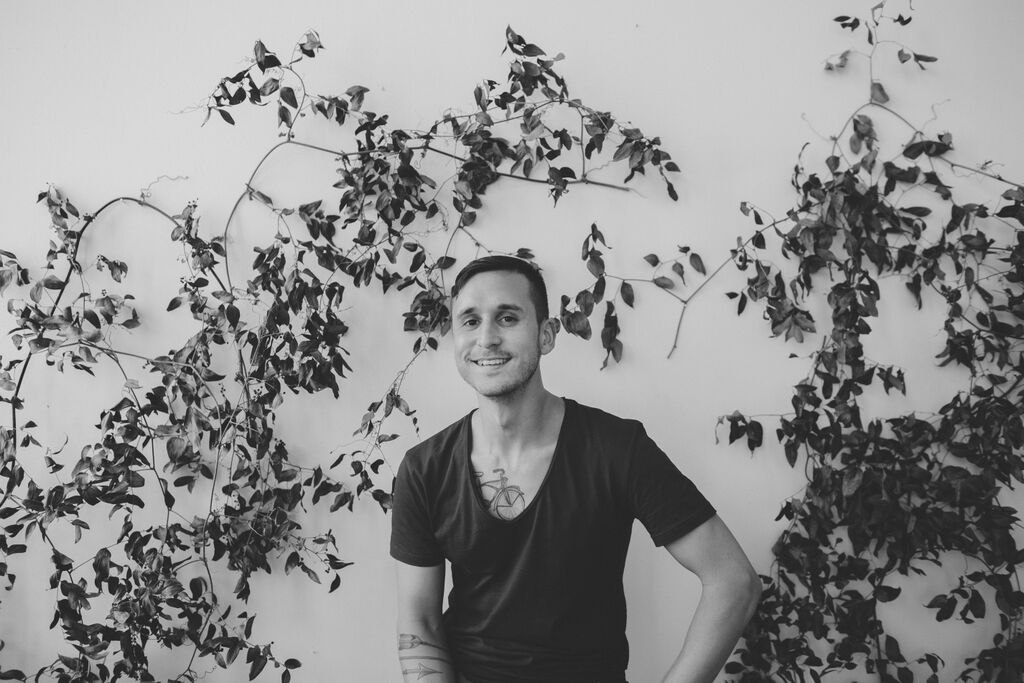 Matthew Santos, the Chicago-based, alt-folk-rock singer-songwriter who was nominated twice for a Grammy award for his collaboration on Lupe Fiasco’s mega-hit “Superstar”, is back with his latest, and 7th, studio album Into The Further, which was released this past June on Candy Rat Records. The album shines a spotlight on Matthew’s appealing, heartfelt, and soulful vocal delivery, as well as his melodic and fluid guitar-playing style.  On Into The Further he is assisted by a cast of talented musicians who provided rich instrumental and vocal accompaniment to the album’s 14 captivating tracks. Matthew has been touring the world in recent years and is now collaborating with other Chicago-located bands on a new “dark RnB/80’s electro-pop/rock” project called MONAKR. The act has released two singles and Matthew and company are intending to deliver more MONAKR material by the end of the year.

Northern Transmissions: Hello Matthew!  It’s such a delight to have the chance to chat with you about your captivating 7th studio album, Into The Further, which was released this past June on Candy Rat Records and features plenty of your heartfelt and soulful vocals and mellifluous guitar-playing.  What themes and musical styles drive your new album?

Matthew Santos: Pleasure speaking with you as well!  The album title Into the Further is an open-ended reference to striving to achieve the next level in our personal, creative, and collective endeavors, while encouraging an active exploration of the unknown. Into the Further is essentially about embracing and adapting to change, with references to environmental issues, love, and new beginnings.

NT: You are known pop culture-wise for your collaboration with Lupe Fiasco on 2007’s “Superstar” and consequently being nominated for 2 Grammy awards. That was a heady time for you.  Why did you decide to remove yourself from that rarified atmosphere and head back to your hometown of Chicago to continue work on your own material?

MS: I decided to step back for many reasons.  I think that while the Lupe collaborations were filled with excitement and were a lot of fun, it wasn’t quite what I was looking for.  On top of that, I wasn’t ready for that kind of mass exposure and success.  I appreciate the accolades the whole experience afforded me, but that kind of fast ride doesn’t fly without consequence.  I didn’t like who I was becoming, how the success and praise was getting to my head.  It derailed and hijacked my own solo efforts with my band, and there was a lot of inner conflict surrounding the spirit of the whole thing.  Music was always a way to connect to something bigger than me, while exploring the possibilities and freedom of expression.  Furthermore, I didn’t want to become known only as “Lupe’s hook guy” as I had so much to offer than that.  Plus Lupe and I see the world very differently and don’t agree on how people should be treated who have helped you realize your dreams.

NT: You’ve been touring world-wide these past few years as a ‘one-man-band’.  Does that mean you’ve been working as a solo artist, playing gigs in a stripped down format consisting of you and your guitar?

MS: Well, yes and no.  When touring on my solo project, it usually is a one-man-band of sorts with the use of numerous effects pedals and devices to make a much larger sound than expected.  For instance, I often beat-box and loop a back beat to play a song over, while utilizing vocal effects like a harmonizer or big delays and reverb.  I try and make the solo shows as eclectic and well-rounded as possible, so it’s not just another “guy-with-guitar” experience.

NT: How were the vibes on your recent tour of the Midwest and West Coast of the U.S.?

MS: It went very well, thank you; love playing in my hometown Minneapolis and was able to bring the band out for that one for the first time in years.  California is always a treat with a nice balance of work and play.  I capped that one off with an amazing camping trip up the redwoods.

MS: This Burning Ship of Fools entailed the most production I’ve ever put into a record, as we actually had a budget (Thanks Lupe!).  It is a massive and eclectic album that unfortunately didn’t get nearly as much attention as it probably deserved (biased opinion of course), yet it still stands as my most engrossing and extensive effort to date.  We had a gospel choir and a string orchestra, with take after take of electric guitars and synths, as we were really shooting for the moon with this one, trying to make it as epic for a pop/rock album as possible.

With Quickly Disappearing I toned down the production significantly and tried to bring it back to my acoustic, folk/rock roots as an artist.  There are still some big songs on that one (and some really intimate ones), but I approached it as more of a full album experience from beginning to end. This record doesn’t have the electric highs as its predecessor, but was overall a more cohesive and mature effort.

Into the Further, as noted above, was recorded with more emphasis on the live performance than anything else, with very little post-production or overdubbing.  It definitely steps outside of the folk/rock/pop genres at times, and again is meant to be taken as a whole.  It was originally intended to be a stripped-down solo record, but then I started working with a couple of incredible musicians in a new trio arrangement, both with heavy jazz influences, and the songs transformed into something else entirely.  We then had some lush string arrangements done for a few of the songs that really brought it all together.

NT: Most reviews of your music mention the distinctive vocal similarity between you and Jeff Buckley.  I’m assuming that you take the Jeff Buckley comparisons as a compliment, but on Into The Further I feel like you’ve expanded your tone and intonation as a singer.  Did you intentionally try to shape your vocals in different ways on the album?

MS: I’m always exploring new ways to use the voice while staying somewhat within the realm of accessibility, as it’s really the most versatile instrument we have.  It’s also fun to work with different effects and filters to achieve a variety of textures.  Most the vocals on this record were all recorded live with guitar in hand along with the band, as opposed to tracking them separately.  In some cases, there were sonic issues like the guitar “bleeding” into the vocal mic, or some questionable notes or phrasing that would otherwise render the vocals unusable.  Yet in the spirit of keeping it live and raw, we rolled with it.

NT: I’m swooning over your song “It All Works Out”, mainly because of your passionate vocals, but also for the reeling, reverberating guitar line near the start of the song.  How did you achieve this sound?  I’m not sure if this is technically correct terminology, but are you playing cascading arpeggios during that guitar section?

MS: So, “It All Works Out” used to be the second half of “Seven Years”, which made the song around eight minutes long.  They were recorded live as one fluid movement from start to finish, so as “Seven Years” comes to a close, I switched on some big delays and reverb, along with heavy distortion on the acoustic guitar.  I then proceeded to strum the open strings creating a wall of sound that built up into the guitar solo.

NT: Will you be releasing any music videos to promote Into The Further?

MS: Most likely just live in-studio videos at this point.

NT: The album is filled with contributions from other musicians who have helped to develop and deepen its instrumental aspects.  Who collaborated with you on Into The Further?

MS: Yes! Emma Dayhuff is holding down the bass with her upright playing and is a huge part of the record.  She’s amazing at what she does, so tasteful and easy to work with, and always such a pleasure to share time and space with. Jon Deitemyer is a beast of a drummer with impeccable dynamics and musical sensitivity.  Again, so easy to work with on all levels, a masterful percussionist, and all around good dude. Matt Ulery contributed all the string and brass expansions on the record, as well as on the previous album.  He’s a boss of a composer/musician himself and really nailed the esthetics on this one making the songs that much more delicious. Also, the string and brass players were all killer musicians, including Chihsuan Yang on the violin and Katinka Kleijn from the Chicago Symphony Orchestra on cello.

NT: I recently found out that you are also involved in a more pop-oriented side project named MONAKR!  Can you go into the details of who else is in the band and what you have up your sleeves as far as releases and gigs go?

MS: MONAKR is an exciting new project/collaboration for me that is just starting to get traction.  Labeled as a “dark RnB / 80’s electro pop / rock” band, it’s really a collaborative effort from members of Chicago bands Hey Champ, Gemini Club, and myself.  We are currently writing more material, have already released two singles, an RAC remix, and a cover of Massive Attack’s “Teardrop”.  Our second single made it to #20 on the Spotify Global Viral charts, which was really exciting.  We recently signed with booking/talent agency William Morris Endeavor and are working on setting up some gigs in the fall.  We hope to release more content by late 2015.