3 weeks ago
Words by Robert Duguay 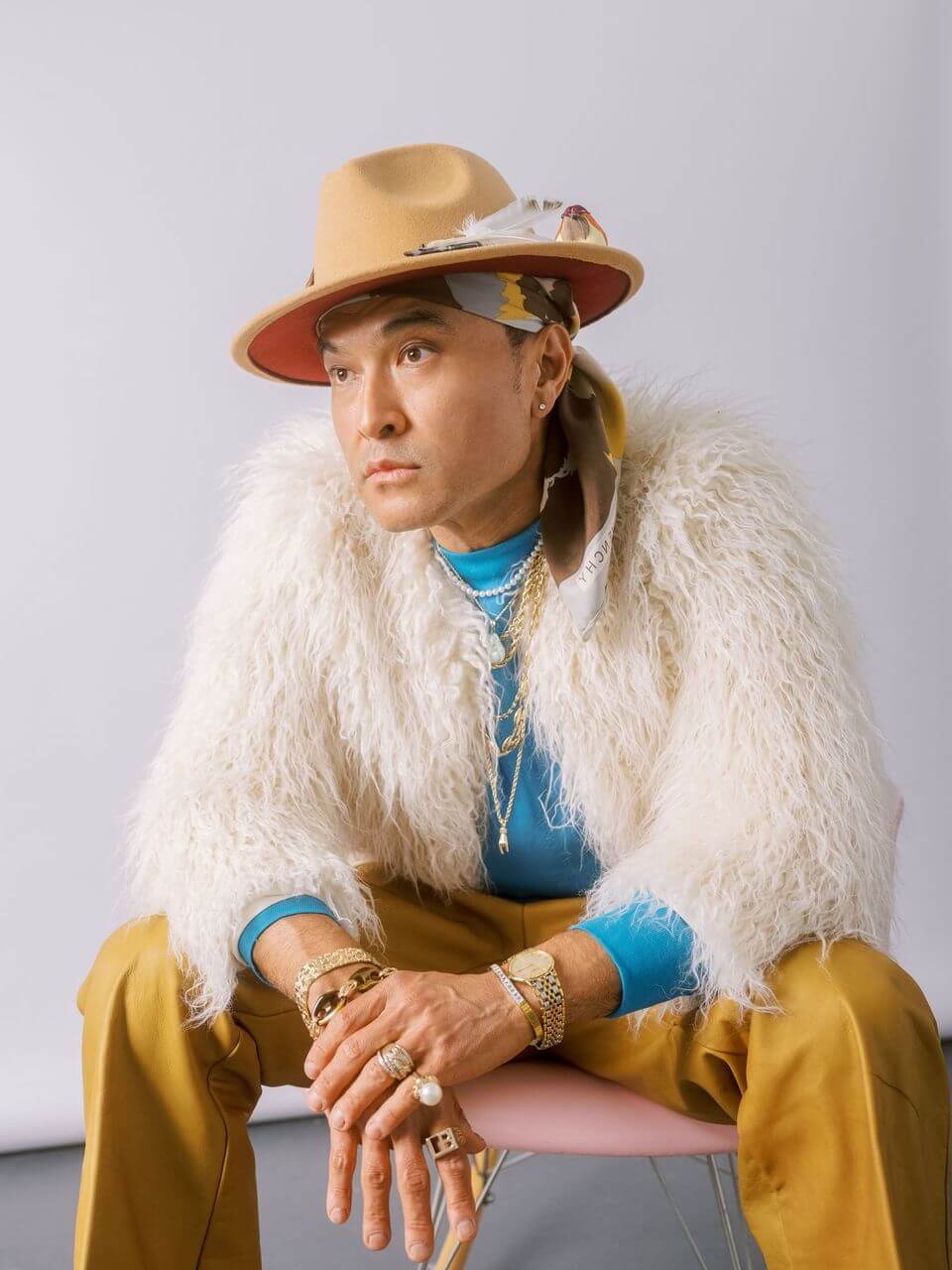 Lyrics Born Takes Collaboration To New Level With ‘Mobile Homies Season 1’ Not many artists in hip hop push the boundaries of the art form quite like Lyrics Born. The Japanese native started his music career in the California college city of Berkeley during the mid-90s and since then he’s had an incredibly prolific output.

A lot of his discography results from joining up with other artists, rappers and producers for a variety of tracks, but recently he’s taken this approach up another notch. On April 15, Lyrics Born released the collaborative album Mobile Homies Season 1 via his label Mobile Home Recordings and it has a ton of features. These include the likes of Dan The Automator, Galactic, Lateef The Truthspeaker, Rakaa from Dilated Peoples and Prince Paul among a bunch of others.

We recently had a talk about how a podcast being done in the midst of COVID-19 quarantine influenced the making of the album, dealing with the structures of streaming services, a hard-hitting music video he put out for one of the tracks on the album and hoping to make it into a yearly album series.

This interview was condensed for interview purposes

Northern Transmissions: What made you want to put out this kind of record with tons of different artists playing a part in it, either with lyrics or with production, or beats and all that stuff?

Lyrics Born: During quarantine, when we were pretty much in the very depths of it, and of course we didn’t realize it at the time, but because nobody quite knew how long it would last. I started a podcast on my YouTube channel and on my Instagram called Mobile homies where I would basically just have conversations with a lot of my friends in showbiz. Either in music or in movies or whatever and we just ended up having these really amazing, great, deep, connected conversations. It became clear to me that, number one, it was a lot of fun to do and number two, we really needed that connection, everybody involved really craved that connection. Judging by how the fans reacted to it, people seemed to really feel connected to the actual conversations as a third party.

I was thinking to myself that if it made for an awesome podcast, I knew it would make for an awesome album series. I basically reached out to everybody that was involved in the podcast as a guest and then I had recorded some songs just prior to quarantine with some of the same people, which I put together as an album.

NT: Very cool. How were you able to transition the podcast to this album in a way that maintains the artistic essence of both projects?

LB: You just do it? (laughs) I don’t know. I don’t even know that I really thought about it that way, you just do it. I recorded the songs and then we were able to use excerpts from the podcast to link the songs together and to glue the album together, which was cool. It gave it a little more context and a little more point of reference to the actual content and as a result, it doesn’t sound like any other album out there. Yeah, definitely. It also doesn’t sound like any other album that I’ve made, either, and that’s what’s really important. This is my 13th album, I think as you get deeper and deeper into your career, and I’m a couple decades in at this point, I never want to make the same album twice. For me to continually keep coming up with ideas, that becomes the challenge as you become a brand. I’m very proud of the fact that I was able to do something that I’ve never done before and put out an album, the kind of album that doesn’t exist right now.

NT: It is different, especially with the voice clips between the songs and everything it makes for an immersive experience, rather than having to be track by track. I really enjoyed it.

LB: Exactly, that was actually kind of a fight to be able to do that because the streaming platforms are not set up that way. They&#39;re only set up for you to listen to individual songs and singles. They’re not really set up for you to listen to an album as a continuous piece. That was kind of a struggle to be able to make that work. It’s just interesting how what I wanted to do didn’t even fit with the parameters or the format of the way that the streaming service is.

NT: I totally get you on that. Around a year ago you released a music video for the track “ANTI” with DJ Cutso that’s on the record and it examines the increase in Asian hate due to the COVID-19 pandemic. The video is pretty hard-hitting with photos of articles, quotes and protests backing up what you’re rapping about, so who had the idea to have it be presented in this way to get your message across?

LB: Good, that was the point and I wanted to take it further. With the streaming platform parameters, we were concerned that the video wouldn’t get shown. From that, I believe that the video is even more graphic. When I say it’s more graphic, that’s a little deceiving, because we perceive that as being too graphic for the platforms, but really all it was was footage that exists so these things actually did happen. The song was written, recorded, shot, uploaded and had a nonprofit donation campaign established within 10 days.

That’s the fastest I’ve ever done any of those things and I’ve done all of those things before. I had never, ever done anything that quickly and that just speaks to the urgency of the issue that had to be addressed. It had to be addressed at that moment, It had to have a visual component so that it couldn’t be ignored and it couldn’t be unseen. I’m glad you said that it was hard-hitting and I’m glad that it has that effect. I want it to be difficult to watch for a lot of people because we live with that.

NT: It’s something that you can’t sugarcoat. When it comes to racism against any community, race and/or culture of people you have to put the facts out there, get your message across and tell folks what is really going on. They might not know anything that’s going on right now with the Asian community and the COVID-19 pandemic, so the video puts it all out there for people to see which I think is great.

LB: It was really interesting because a lot of my non-Asian friends called me during that period when we put that song out. It’s about a year ago now and you know, sadly, this kind of speaks to my point, it’s still happening now and the numbers are still quite high as far as targeted violence goes. It’s funny, for the first time ever, I don’t remember in my lifetime ever hearing the two words Asian-American on CNN until this happened so we knew we had a moment. We knew we had people’s attention on this terrible issue and we knew that we had to capture that. It was interesting because I started getting calls from my non-Asian friends and they’re like, “When did all this start happening? When did all this Anti-Asian violence start occurring?” and I was like, “300 years ago.”

You know it’s always been reality but now it’s heightened at a higher rate now. I can tell you, I’ve been Asian my entire life and I can tell you that this is something that I’ve dealt with since I was four or five years old. Yeah. Like I say in the song, it’s been trending but let’s be transparent. This should reaction have been happening before this, you know what I mean? But it’s just now being documented and brought to light. Obviously, nobody’s happy that it’s happening but I think it was necessary that it was being brought to light in a mainstream way.

NT: Absolutely, I couldn’t agree more. As a fan of yours, one element of your approach to hip hop that I think sets yourself apart is your vocal range. From listening to your music, at one point you can be very rhythmic with your delivery, but then when the chorus hits, you’re singing like a soul singer with an R&B influence. What in your opinion inspires this style where you’re singing at one point, then you’re rapping and merging the two together?

LB: All I can tell you is I’m just a huge music fan. I’m also an artist, songwriter, musician, a rapper or a singer, and a student. If I like something, and I want to try it or if I feel like I have the ability to do something with a propensity, or even if I don’t know that I have the ability to do so, I’m going to try it. If it clicks and it works, I’m gonna run with it and I’m going to continue to do it. I didn’t always see myself as that but as I grew further I realized, what are we if we don’t try new things? Especially as an artist, you have to be willing if you want to grow, if you want to expand, you have to be willing to try.

They’re not always necessarily going to work in a certain way but I think if you try then you’ll know, and I’ve never been afraid to do that. It’s always really important to me as an artist that I set myself apart from other artists, there’s not a single artist on the planet that does the thing that I do all in one. I work very, very hard to push the boundaries, make sure that what I’m doing is unique and that I’m adding on to that rather than just repeating. I’m very, very proud to be a part of this continuum of great music and I take it very seriously. For me, I’m continually trying new things and honing my craft while keeping it interesting and exciting, not just for the listener or the audience, but also for myself.

NT: You don’t want to be bored and you don’t want to put yourself in a box either, you’d rather push the envelope. Can we expect a Mobile Homies Season 2 in the future? Do you plan on making it a yearly thing or a quarterly thing?

LB: I would like to make it a yearly thing, I would absolutely like to make it yearly. I just had so much fun and it’s by far the most collabs I’ve ever done on one album. Every song has at least two or three guests and every song is typically with a different producer. When I make studio albums I generally work with one or maybe two producers on an album, but this is the first time I’ve had 12 different producers. Just to be able to work with Prince Paul, people who I grew up idolizing who grew up making me want to be involved in hip hop, working with Sitcom Dad, we had such a great chemistry working with each other.

These are all people that I really, really respect and to be able to get Blackalicious on that album, especially since Gift Of Gab’s passing, it’s really meaningful to be able to do these things. I love it and yes, this is something I want to do every year.