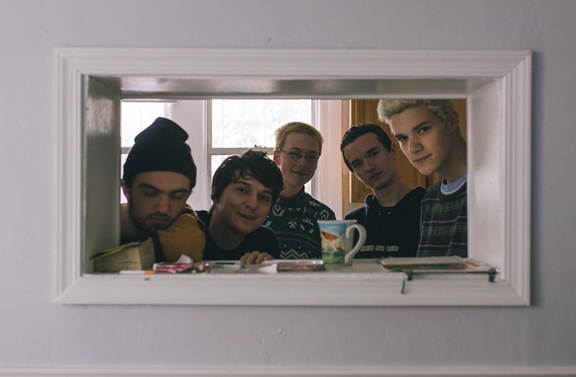 Joy Again is a lo-fi recording project initially started by Sachi DiSerafino and Arthur Shea, both 18, turned full band with the addition of Sean Henry (23), Blaise O’Brien (16), and Logan Burke (17). The five boys all hail from different parts of Pennsylvania (and also New York City) and the youthfulness of the group evidently plays a part in the creation of their inherently fun and unique music.

After catching Shamir’s eye, the XL Recordings artist decided he had to get involved and he now manages the band. Shamir describes the guys as “Extremely aware of the world around them, dangerously smart and super mature without leaving behind that playfulness that a lot of people lose once they start to enter adult life.”

Joy Again recorded their debut AA single ‘Looking Out for You / How You Feel’ in the Red Bull Studios in New York with Caleb Levan this summer. The 7” Vinyl is limited to 300 copies and is set for release on Lucky Number/Mermaid Avenue on 15th January 2016. Lead track ‘Looking Out For You’, available digitally now, is a bouncy tune lead by banjo and sweet harmonies, is a fitting first taste of the album.