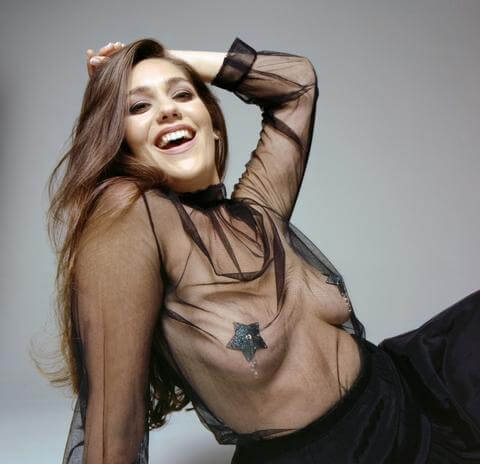 The landscape of country music has had an abundance of amazingly strong, talented and strong female artists that have influenced the genre since its inception. With her sophomore record, Lady For Sale out April 29th via Third Man Records, we can add Lola Kirke to this impressive pantheon. While Kirke is definitely influenced by the entire history of the genre, her music hits that, somewhat overlooked, sweet spot when Country Music and Disco overlapped for a hot minute.

Think Dolly Parton’s “Baby I’m Burning” and Kenny Rogers Eyes That See In The Dark, which was produced by Disco’s grand architect Barry Gibb, and you get the idea of where Kirke is coming from. The singer/songwriter and actress, who you may have seen in films such as Mistress America and Gone Girl, stands out from her contemporaries in this regard. She may be singing the classic tropes of the Country Music heroine but it’s filtered through her own experiences, making the endeavour feel unique and completely contemporary. When we catch up with Kirke on the phone, while her tour bus is crawling up the Sunset Strip, she discusses her influences while crafting the album, how her songwriting pulls from her own personal experience and her need to feel connected in a world that doesn’t necessarily care to be.

Born in London, UK and raised in New York City, it may seem surprising that she embraced the twangy sounds of Country Music and as she explains, even she is a little surprised by it all. “The other day I got drunk and coined the part of the city I live in as the ‘Wild West Village, that could have something to do with it,“ the charming Kirke says jokingly. “Seriously though I think it stems from the fact that I’m not a very skilled guitar player and there was something inviting about those three chords you hear in the genre. Then, of course, as I got more into it I’ve realized how actually complex it is. Kind of kicking myself I didn’t throw myself into Punk Rock,” she laughs. “I really do though appreciate, and was drawn to, how many strong female artists there are in Country Music.” Kirke fits in perfectly in this regard. Her songs display an empowered female protagonist, one that is equally able to paint a vivid picture of the messy situations that come hand in hand with romantic entanglements, but doesn’t shy away from her own failings in these affairs. As she sings through the stomp and lap steel swells of album opener “Broken Families”, “You get high, I get drunk/But you’re still who I want/I don’t need much to get through:Now we’re fighting again/I wasn’t flirting with your best friend/I was just trying to impress you”. Her frank way of putting complicated scenarios into something that is easily understood is so refreshing.

Her approach to the writing and production on the album is something that she picked up from her producer and fellow co-writer Austin Jenkins, who has worked with White Denim and Leon Bridges among others. “Austin has this approach where you can “steal” things based on the contextual approach you want to take with the song,” she explains about the songwriting process, “but the thing about this is because it’s you doing that it’s not going to come off as a carbon copy of what you are inspired by but filtered through you and your experiences. Plus we aren’t writing these songs in like 1980, it’s 2022 so you will be honouring yourself while honouring the artists that have come before you.”

It’s the artists of the late 70s and early 80s that transcended their Country Music pedigree and embraced the influence of what was happening in popular culture at the time that really got Kirke excited. “I really am drawn to that style of the genre,” she explains about that period in time when Country and Disco become synonymous. “I feel like it’s a little overlooked now but I’m hoping if someone hears my record and likes it, this can allow them to discover all that great music that was coming out at that time” Another thing that drew Kirke to this type of Country Music was that it felt fun. “I was writing these songs in the thick of all the lockdowns,” she explains, “and I was drawn to this style because it felt fun and fresh and alive and that’s how I want these songs to come across.”

Now with the record finished and her touring schedule underway, we discussed how she’s balancing her musical career with her already burgeoning acting one. “I’m beginning to feel a little imbalance if I’m being completely honest with you,” Kirke says with a wry chuckle. “There are definitely times that I rue that energetic woman in her twenties that thought balancing these two careers would be a fine idea. It does get hard sometimes and I think it’s especially harder now as so much of the onus is on musicians to really have to get out there and promote themselves. It’s here that I’m finding I’m not actually writing so much these days. Like today, for example, I woke up at 4 am and had this great song idea and thought to myself, ‘Oh, I’ll get to this later’ and then, of course, it’s gone,” she says with a laugh. “My friend Jenny Lewis did explain to me how she looks at her career in a very simple way. She just said, about releasing a record into the world, what is the kind of experience you want to have with it, and for me I don’t want my value to be based on what others expect of me. I want to make things because I want the audience to feel less anxious about existing, especially right now. It’s tough how social media is contributing to the anxiety of mankind and that is the main tool we have to use to promote our work, so it is really conflicting to use it because it feels like, what is the cost of using this? Art can be both incredibly self indulgent and incredibly healing and I thought if I put myself first then the intention of what I am doing, to connect and hopefully help people heal from their anxieties for a few hours, is what will hopefully come across.”