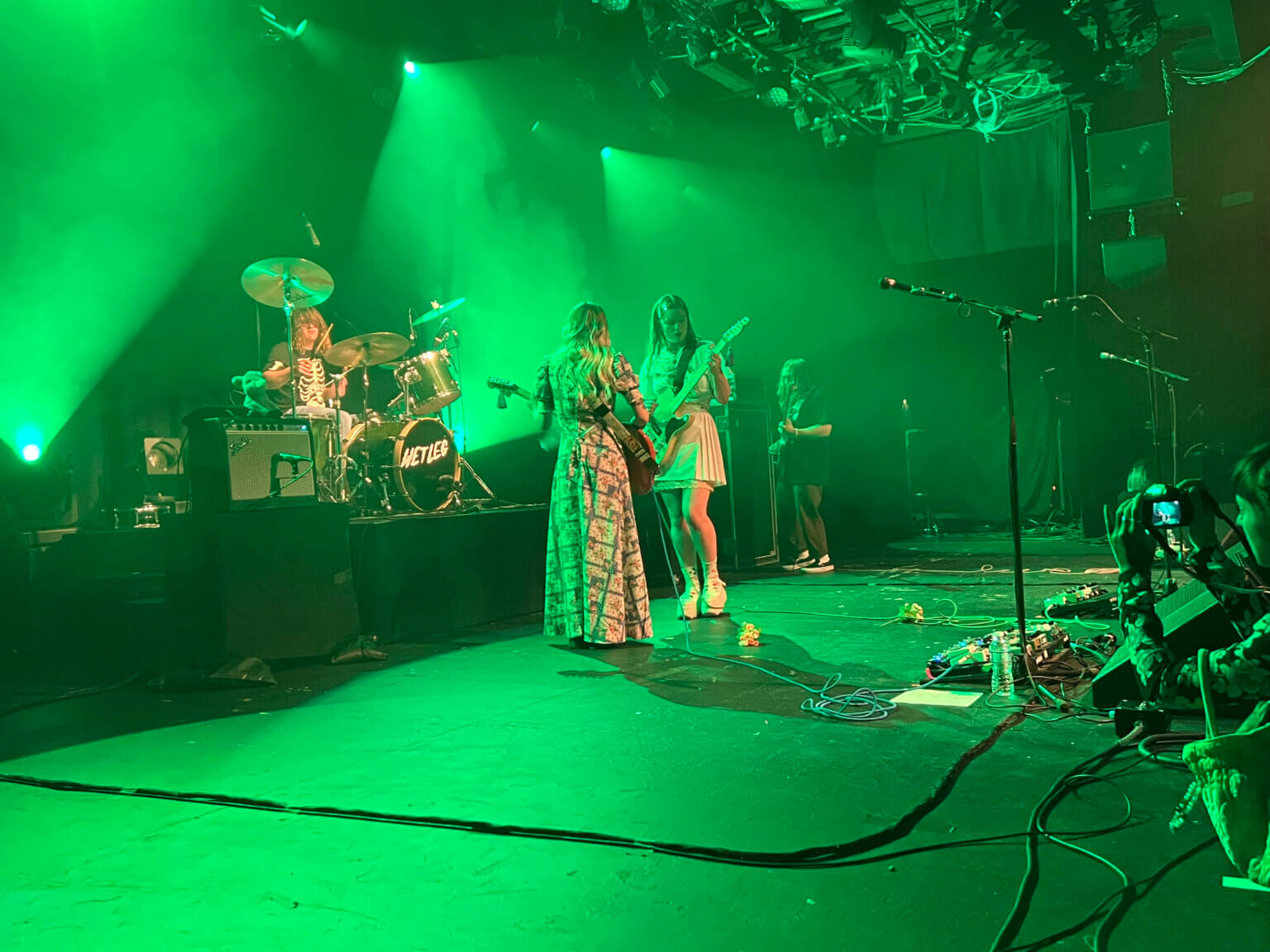 Wet Leg live in Vancouver, BC photo by David Pearlman
Share on TwitterShare on PinterestShare on PocketShare on RedditShare on FacebookShare on Email

Fresh from appearing on Barack Obama’s summer playlist, Isle of White’s finest, Wet Leg, enter Vancouver on a high. After a couple of venue upgrades, the gig was originally gonna be at the Wise Hall, then  moved to the Rickshaw, before settling on the larger, historic Commodore Ballroom. The band come on to an excited, sold out crowd. They have that classic indie rock ‘n rock sound, with beautiful pop melodies, not too dissimilar to bands like the Ting Tings, Kate Nash, Long Blondes, and CSS. It is harsh to call them a 2022 take on these bands, as they definitely have an original, distinct sound of their own and are very far away from being imitators.

Wet Leg are interesting in so many ways, a duo with four performers on stage (normally five, but Joshua is absent tonight, not sure why), singing songs about stretched lounging chairs, being one of less than a handful of cool, exciting bands to ever come out of a small Island off England’s south coast (is that right, sorry, my geography is not the best), called the Isle of Wight.

They don’t disappoint, beginning with the pounding, high energy “Being In Love”. Everyone jumps up and down to the classic, well crafted quiet loud quiet loud song. Next up is “Wet Dream” , this gets a big cheer at the start and an even louder cheer at the end. Starting with two such great songs could leave many one album bands short of quality material, but not Wet Leg. The band play most of the songs from their eponymous album, Wet Leg. Rhian and Hester’s smiles are almost as infectious as their music. Even though Wet Legs are having fun, the floor are enjoying it even more. Surely they will be returning to North America in a couple of years to venues 3 or 4 times the size.

There are a few banter’ breaks:  Rhian checks in with the crow and talks to someone in the crowd from the Isle of Wight, the person is from a small village which is famous for car boot sales (the UK equivalent of a garage sale) and fireworks. They both went to the same high school and Rhian comments that if Facebook was still a thing, they’d be able to work out they had a bunch of mutual friends. It is also pointed out that when they arrived at the venue during the day, the place seemed really creepy, so Wet Leg were even more appreciative that so many people came.

In the middle of Ur Mum, we all join in with the scream, and it is literally deafening. I’m standing by the speakers without ear plugs (don’t do it kids) and the scream is way more deafening than anything coming out of the PA system. Rhian congratulates the crowd on a very good scream. She’s not not wrong.

They finish with what might at the end of the 2020’s, be regarded as one of the decade’s greatest songs. The single,  “Chaise Lounge,” is fun, witty and interesting, with a fabulously addictive pop riff that makes you want to listen to it again the instant it finishes. The crowd erupts when the song starts and why not. We all join in with the “Excuse Me”,  everyone is dancing, everyone is singing along. The only disappointment is the set is well under an hour (including banter) with no encore, but tonight is about quality, not quantity. Great night, great gig.