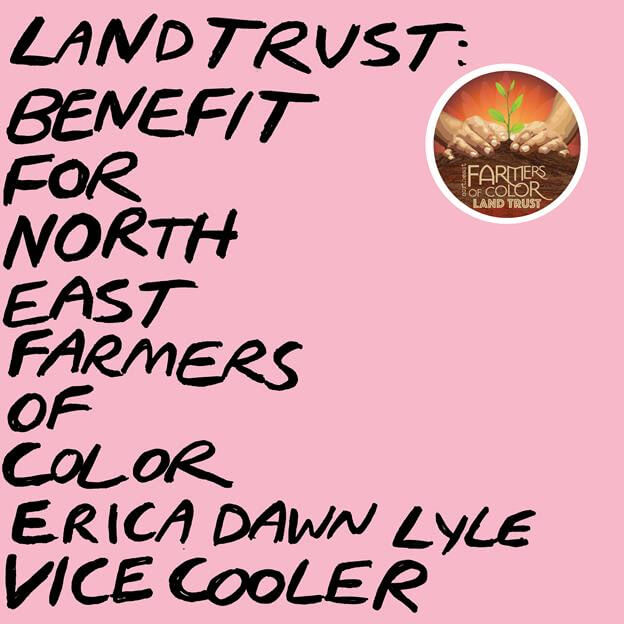 Erica Dawn Lyle and Vice Cooler have dropped “Debt Collector,” their musical and video collaboration with Kim Gordon. Following quickly on the heels of the enthusiastic response to “Mirrorball.” The duo made with Kathleen Hanna (Bikini Kill / Le Tigre) on vocals — the new track in contrast features a classic Kim Gordon vocal, over a sparse, dark synth and feedback drenched soundscape. The accompanying video – the first from the duo’s soon-to-be-released LP, LAND TRUST: BENEFIT FOR NEFOC – serves up some raw LA noir verite with its gritty and unsettling look at the city’s cut throat pandemic-era gentrification.

“You’re not welcome. To the gated community,” Gordon speaks as the song begins. “We bought the block. But you gotta have cash.”

Gordon says the song’s lyrics were inspired by what housing activists have called the “financialization” of housing – the trend in recent years of enormous private equity investors buying up a huge share of the entire world’s affordable housing stock in order to trade bulk real estate as a speculative asset in the global financial markets. Investors typically buy up large areas in up and coming neighborhoods, becoming absentee landlords who ignore tenants’ needs while driving up rents and displacing long settled communities.

“I’m a bit obsessed” says Gordon, “with what’s happening with these big financial corporations like Blackrock and Blackstone buying up houses, becoming landlords. They pay far beyond a house’s value, putting home ownership even out of the range of the middle class – much less working class.”

The video for the song, directed by Cooler, is a harsh visual tour of the Hobbesian landscape of present day Los Angeles and the interstitial zones where the worlds of the haves and have nots overlap in the form of razor wire and security camera zones. For Cooler, who is currently facing eviction from his Silverlake home where he recorded his parts for Land Trust in his home studio, the inspiration to make the video felt deeply personal.

“Kim created a very powerful lyrical statement on real estate and land, and the companies that have been purchasing (and laundering) properties at the expense of low-income and working class housing,” says Cooler. “Her lyrics really resonated with me because I’ve been displaced from three homes as an adult and I hold a constant anxiety that I won’t be able to obtain stable housing at all – let alone be able to afford a home.”

According to Cooler, the video’s quick cuts are comprised of footage of residences that are currently in the process of being evicted and the new condo developments “that have been constructed over demolished low-income homes and historic landmarks.”

“The finished cut for the ‘Debt Collector’ video was extremely intense for me to watch because I was familiar with the history of most of the sites I filmed, and therefore I knew about the families and communities who have been and are still being forcibly displaced,” he says.

Cooler shot Lyle’s scenes in the video while she was in LA this April rehearsing for Bikini Kill’s upcoming world tour. Lyle suggested they shoot at Echo Park, the site of perhaps the most significant battle over land and displacement in the city’s recent memory.

“During the pandemic, hundreds of unhoused Echo Park residents banded together in the park to create together a beautiful community based on mutual aid practices,” says Lyle. “It was an encampment run peacefully by its own residents with a community garden and a shared kitchen. They even used donations of money that came in to pay members of the community to do work around the encampment.”

In March of 2021, the city of Los Angeles spent some $2 million to evict the encampment. Though the city claims they moved residents of the park into housing, a recent UCLA study found that only four residents had moved into permanent housing and that more people from the encampment had actually died since the eviction than had found housing.

For Lyle, who made “Debt Collector” with Cooler and Gordon remotely via file sharing during the pandemic from her home in New York, Gordon’s lyrics resonate perfectly with the political motivations behind the entire Land Trust project. “The modern day gentrification that Kim describes is just a continuation of the colonizer mentality and white settler violence with which the land that makes up the United States was stolen from its Indigenous inhabitants to begin with. The record was conceived as a benefit to help Northeast Farmers of Color (NEFOC) acquire this stolen land again in order to return it to Indigenous and POC farmers. ”

Cooler met Gordon when he was only fifteen years old, when Sonic Youth invited Cooler’s legendary DIY noise-core band of instigators, XBXRX, on tour as an opening act. Says Cooler, “Though we have worked together frequently over the past few decades, it was still impressive to see how Kim excels at following her own impulses so naturally and how she can capture such intense feelings so quickly. When I worked with Kim on her vocals, she came in with nothing more than a notepad of ideas. Surprisingly, we cut the vocals within half an hour.”

Gordon agrees. “Vice is so fast, it’s always fun to work with him. He gets what I like.”

For Lyle, the process was also free flowing and intuitive. “Vice sent me these blown out synth and drum tracks that were just so sick and full of dread. I wanted to leave space for the breathiness in Kim’s vocals and to make something that sounded fresh, different from the big guitars associated with Sonic Youth. So I grabbed a L’Oreal all day lipstick off my desk and jammed it under the strings of my guitar and got this. One take.”

ABOUT NEFOC
NEFOC is an Indigenous and POC-led grassroots organization that seeks to connect POC farmers to land, to grow healthy foods and medicines for our communities. We plan to accomplish this by acquiring and returning land to Indigenous nations and respectfully connecting Black, Asian, and Latinx and other POC farmers and land stewards to land while centering and respecting Indigenous sovereignty. nefoclandtrust.org

More About LAND TRUST
In March of 2020, with Bikini Kill’s anticipated reunion tour canceled, the band’s new guitarist Erica Dawn Lyle and drum tech Vice Cooler were wondering how to be useful. A long time participant in DIY punk communities, Lyle—also an arts critic, author, filmmaker, organizer, and free improvising experimental guitarist—was quarantined at her home in upstate New York as an early-pandemic spirit of mutual aid amplified throughout the culture.

“People were trying to figure out how to help each other,” Lyle said. “I thought: All the musicians are home right now. It would probably be easy for us to do something quickly—because everybody, everywhere, is trying to find a way to help.”

Cooler, a photographer and video director who is also a producer for acts like Peaches and Ladytron and the drummer of The Raincoats, was locked down in L.A.—conveniently, at his own home-recording studio. “Like everyone, I was extremely confused about how I could use my limited skill set and resources—which mostly exist in the music and video worlds—to help others from this place of isolation,” he remembers.

Lyle reached out to Cooler with the spark of an idea for a digital album to generate funds. The duo soon devised a remote process of recording: Cooler sent Lyle the drum parts, to which Lyle improvised guitar riffs. When they had about a dozen near-complete songs as a guitar-drum duo, they began reaching out to an array of guest vocalists in their extended community to contribute original lyrics and to sing. “Working on these songs everyday with Vice—and the hope that others would work with us—was like an anchor for me during that really difficult era,” Lyle said.

What resulted is not a traditional benefit compilation at all, but rather a uniquely collaborative album of original material. LAND TRUST: Benefit for NEFOC is a staggering survey of contemporary feminist punk spanning generations, including legends from the dawn of punk as well as newly emergent voices. A mix of industrial, art-rock, post-punk, and beyond, it finds germinal punk icons like The Raincoats, Kim Gordon, and Alice Bag alongside younger artists who they’ve inspired over several decades. All profits will benefit the Indigenous-led grassroots organization Northeast Farmers of Color Land Trust (NEFOC), which acquires farmland in order to return it to Indigenous nations and to reconnect POC farmers to land stewardship and control.