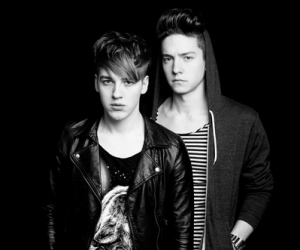 Kid Karate is vocalist/guitarist Kevin Breen and drummer Steven Gannon. Behind Breen’s thunderous riffing and howling, and Gannon’s primal drumming, the duo makes a particularly huge kind of rock and roll. Their music also conveys a gritty raw feel to it that should conjure up thoughts of a sweaty dance party in a packed dingy bar. Like a more focused Death From Above 1979, or a rougher and nosier LCD Soundsystem, Kid Karate emits far more noise than two boys ought to be able to.

The duo, with their intoxicatingly friendly personalities, are certainly standouts in the creative world. Kid Karate are very much engrained in the fabric of the music scene in Dublin and have collaborated with members of two other rising star bands in the scene, Jason Boland (of Kodaline) and Dave Prendergast (of Overhead, The Albatross), who produced/engineered the recordings on this debut EP.

Breen and Gannon have been putting in work over the past few years building up a strong profile in Ireland. They’ve cut their teeth and mastered their craft through regular club shows and slots at many of Ireland’s smaller local festivals, like Hard Working Class Heroes and Castlepalooza. All their work has paid off, as the last two summers have seen them selected for slots at the bigger national festivals (Body & Soul, Forbidden Fruit, and Electric Picnic) alongside international acts including Sigur Ros, The xx, The Cure, Crystal Castles, James Murphy, The Horrors, Django Django, and more.