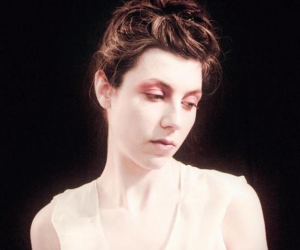 Julia Holter is set to release Loud City Song, her first studio album for Domino on August 19th 2013. Streaming today, ‘Maxim’s I’ is the third glimpse of this record to be shared by the Los Angeles-based artist – following Loud City Song’s spectral, stark opening track ‘World’ and the gracefully euphoric lead single ‘In The Green Wild’.

’Maxim’s I’ is one half of a pair that forms the centerpiece of the album that revolves around the search for truth and love amidst a culture that can be alienating in its superficiality. The song is named after the storied Maxim’s restaurant in Paris prominently featured in the musical Gigi, which served as an inspiration for the themes and settings of Loud City Song.

Suspended between dream and nightmare, ‘Maxim’s I’ sees Holter recreate a key scene from the musical in which Gigi enters the bustling Maxim’s only to be greeted with complete silence as the restaurant’s patrons gaze at her judgmentally: “They’re all looking at her voyeuristically and gossiping about her,” explains Holter on the way the scene inspired her to draw parallels with the modern social mores of her native LA. “It intrigued me on a lot of levels – that social atmosphere, the elaborate costumes, and the theatrical movement.”

Holter wanted to present ‘Maxim’s I’, the heart of the record, alongside Rick Bahto’s behind-the-scenes photographs of the making of it, with all of its participants shown hard at work–the musicians, producer, engineer, and everyone else who contributed to it. So Bahto (also responsible for the record’s cover art) created a filmic “photo gallery” to the sound of the song, which can be watched above.

Loud City Song is the new studio recording by Los Angeles based artist Julia Holter, set for release by Domino on August 20th 2013 (August 19th in the rest of the world). The album is Holter’s third full length release in as many years – following 2011’s  debut Tragedy and last year’s follow-up, Ekstasis.