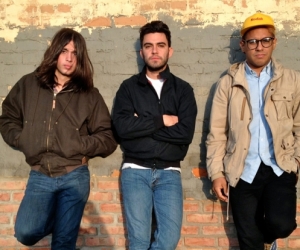 Share on TwitterShare on PinterestShare on PocketShare on RedditShare on FacebookShare on Email
Hailing from Miami, home of Gloria Estefan, booty bass and South Beach, Jacuzzi Boys brazenly defy geographic expectation with the monumental guitar-driven rock on their upcoming LP, Jacuzzi Boys, out September 10th through Hardly Art. The album’s eleven tracks, recorded at the Key Club Recording Co. with expert engineering from Bill Skibbe/Jessica Ruffins and mastering from Kramer (who has worked with the likes of Daniel Johnston, Galaxy 500 and Butthole Surfers,) entice the listener through a wormhole of meticulous surf fuzz, toeing the line of chaos with an ear for precision. The output from guitarist/vocalist Gabriel Alcala, drummer/vocalist Diego Monasteri and bassist Danny Gonzalez bleed together into a sonic force that builds on the raw swamp stomp of Jacuzzi Boys’ first two LPs now with a sundrenched polish. Newfound Miami neighbor Iggy Pop has taken notice of the group, noting, “There’s a band here in Miami called the Jacuzzi Boys. It’s a stupid name, but they’ve got a good spirit.” From Southern Florida to the world, the band has toured with the likes of King Khan and the Shrines and, most recently, Man or Astro-Man? Jacuzzi Boys revels in a sense of raucous summer escapism that is destined to attract audiences and multitudes of critical cosigns alike.