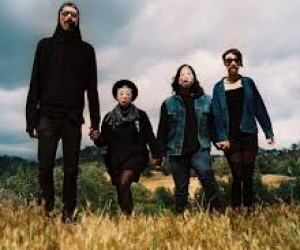 Today, Islands is excited to release their new video for “Wave Forms.”  Directed by Strike Anywhere, the beautifully shot video follows Islands as they join a lone roller skater (played by Cory Zacharia) as he rolls through the streets of Lancaster, California.  Zacharia has been a recurring character in Mike Ott’s films, including Littlerock, Pearlblossom Highway and the upcoming Lake Los Angeles.

Strike Anywhere is a production company and team of directors. Based in Los Angeles and San Francisco, their work includes commercials, feature films, and content for the Web and social media.

Released earlier this year, “Wave Forms” has been hailed as the band’s “most concise and confident singles since Return To The Sea” and one of the highlights of Islands’ latest record Ski Mask. Released in September, Ski Mask is an album that’s equal parts beauty and venom.

Formed in 2005 after the dissolution of lead singer Nick Thorburn’s previous (and much beloved) band The Unicorns, Islands quickly established themselves as one of the most erudite and forward-thinking pop bands to emerge from the Montreal rock scene.  Over the course of four albums – 2006’s Return To The Sea (inspired by South African high life music), 2008’s Arm’s Way (a study in orchestral pop and playful psych), 2009’s Vapours (pulsing electro pop), and 2012’s A Sleep & A Forgetting (soulful singer/songwriter fare) – Thorburn and co. showed off a remarkably chameleonic ability to bend a variety of different musical styles to their will.  With Ski Mask, Islands has synthesized their diverse musical tastes into one concise whole.

“Ski Mask is kind of a culmination of all the different things we’ve done over the years,” says Thorburn.  “It’s like a summation of Islands, everything we’re ever done distilled into one record.  It’s basically an essential introduction to Islands – it’s everything we’ve ever been about.”