Interview With Stella Mozgawa From Warpaint 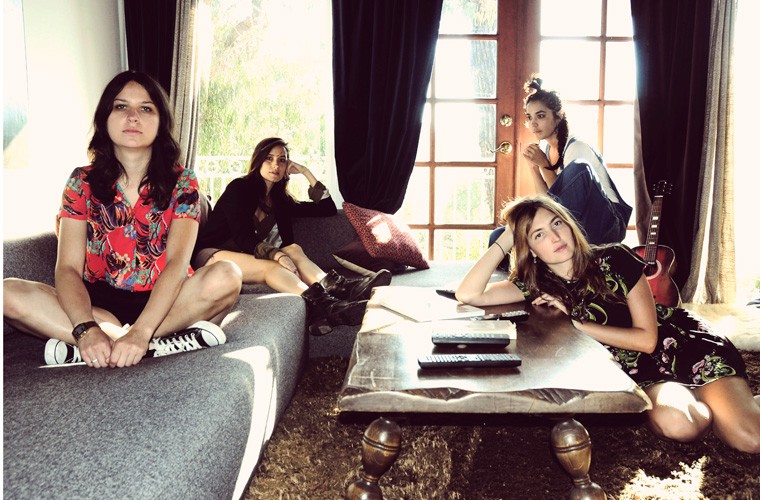 Warpaint’s drummer Stella Mozgawa isn’t just a talent with the sticks – For the band’s 2014 self-titled album, Mozgawa acted as an essential part of the preproduction process for many of the songs, engineering demos of the band, many of which formed the basis of what you hear on the finalized Flood-produced record. She also DJs parties and bars a few times a month in the Los Angeles area, where she spins everything from Turkish funk to ‘80s soft pop. Warpaint’s most recent release, a 12” split remix single with Daughter, features Stella laying down some minimal house beats with a ghostly array of samples and automated grooves. She has always considered herself the on-the-road type, and her penchant to be in a constant state of motion shows in her work.

Suffering from a minor foot injury, Stella and I talk on the phone, as she sits by patiently waiting for her surfing accident to heal. “I basically just shredded the bottom of my foot,” she says, adding that the sunny L.A. weather “is sort of indifferent to my pain.” Despite the mishap, she is in high spirits, and the two of us share an off the cuff discussion, discussing favorite records, DJing, working with Flood, and the influence of PJ Harvey.

Northern Transmissions: What do you think you’ve learned about yourself that the tour is over?

Stella Mozgawa: For me personally:  even  though I’ve been touring for ten years of my life – I always though of myself as a road dog. — I guess at the end of this period, being a little bit older and wiser, I realize that I’m just as happy being at home making music and staying in one place for more than a month’s time. My adventuring spirit is still very much alive, but it’s not so much the primary joy in my life.

NT: What do you do when you are just home chilling, and there’s nothing wrong with your foot?

[SM: Laughs] Well, I wonder if it would be different. I mean when you’re at home and you can’t distract yourself with going out to a bar or DJing somewhere…You really find out what you like to do with your spare time, and how you like to tour manage your days. I feel like I really enjoy working on music when I’m at home. I get a great amount of joy from making music on my own, and with other people obviously, but there’s nothing like that time of being creative and having your own output.

NT: How did you get in touch with Flood to produce the most recent Warpaint recod?

SM: A friend of Emily [Kokal] had mentioned that he would be a really appropriate producer, so when the idea of using someone for this record, we were already in London and thought ‘what the hell?’ and reached out to him. He’s very particular about what he does and who he works with. He genuinely feels like ‘I can help to make this record better.’ That’s pretty rare for a producer.

NT: Do you have a favorite record that he has produced?

SM: There were two actually that kind of opened my mind. To Bring You My Love by PJ Harvey, and her latest record, Let England Shake. Those two demonstrate the scope of styles and techniques, and while we don’t necessarily make the same kind of music, I think the spirit of the way they were recorded and the moods of those records is really appealing.

NT: I can definitely hear the link between those two records and the Warpaint self-titled. Speaking of – I’m always curious when a band decides to title a non-debut record after themselves. Sometimes it has a meaning and sometimes it’s totally arbitrary. If it does have a meaning, could you tell me?

SM: [Laughs] Basically it was the first record that was made with all four us from beginning to end. The last record I had just joined two weeks prior to recording. I had a lot of say in how things sounded, [but] I still wasn’t there for that first moment of inception. This record was the first record we made from start to finish and that felt significant.

NT: Can you tell me about the new remix 12” with Daughter?

SM: Basically, I make that remix with a little bit of Jen [Lee Lindberg]’s help. We basically just made it and ended up finishing it on the road. It was kind of the first proper remix I’ve ever done. We’ve done a lot of festivals with [Daughter], and they’re really lovely people and they’re really interesting and creative talent. I love what they did with our song as well.

NT: You said you DJ. When you spin, do they typically sound like this remix?

SM: No, generally when I DJ, it’s at a party or a bar. I like to be a crowd-pleasing DJ in those circumstances. DJinging vinyl and weird Turkish funk records. I’m actually doing it tonight with a friend at this bar, and we do it every few Mondays.

NT: What’s you latest, favorite thing to drop in your set right now?

SM: There’s this record called The Very Polish Cutout Sampler, and myself being Polish, it holds a very dear place in my heart and it’s amazing. [The track], I can’t actually say it, but it’s the first song.

NT: And what is your go-to standby?

SM: That has to be Lionel Richie’s “All Night Long.” It’s unbeatable.

NT: What are you top 5 records of all time?

SM: [Laughs] You know how unfair that is.

NT: I know, it is the worst question.

SM: Ah, fuck. Well I just go with some of the things I’ve just been listening to. I hate it because I say five things and then something else comes up and I’m like “Wait, those five are definitely my favorite.”

NT: Right totally, but for the record we’ll just say that this is what you thought of at this moment.