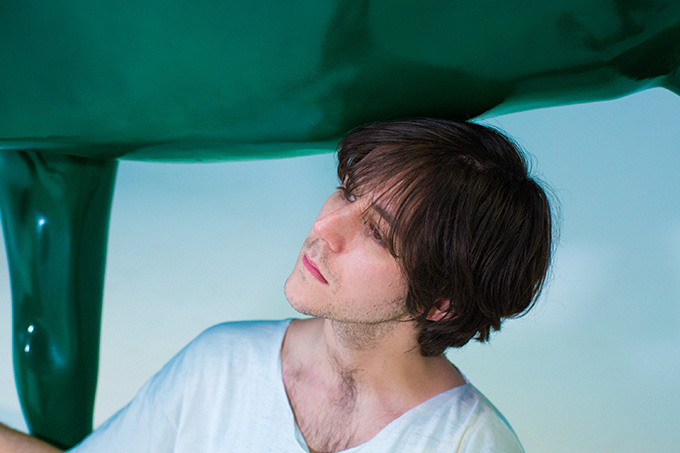 Sam Evian’s Premium is set to be released on September 30th of 2016, and the easy-going nature of his debut album seems to be an accurate reflection of his character. Laid-back and soft spoken during our interview, it nonetheless becomes clear that underneath the calm exterior of both the man and the music there lies a thoughtful and empathetic artist who is tuned into the world around him. Although Premium reflects matters mostly personal, some songs also contain more outward looking commentary on contemporary sexuality and the nature of freedom. This makes the nods to Americana and classic 20th century arrangements all the more poignant. Soon he will take Premium on the road, across the complex nation that informs his music.

Northern Transmissions: You have said that you were confident and happy during the recording process. Do you find that to be a necessary prerequisite for creating music that you are satisfied with?

Sam Evian: I don’t think it is necessary, it’s just how that record came out. I guess a lot of people have been telling me it sounds really relaxed and easy-going and I think that’s just because of how the sessions went. But some of my favourite music has been made under more dire circumstances. I think that’s more desirable sometimes.

NT: How would you describe working in Figure 8 studios in Brooklyn? What was the day-to-day process?

SE: It was pretty low-key because I work there as an engineer and I’m there a lot of the week. It’s kind of like my home. I would have a session, and then I would have some free time after the session and call my bandmates to come over and do some recording after 7 PM. We would record for three hours and call it. That happened 3 or four times, and that’s how we made the basics of the record.

NT: Do you feel like Brooklyn itself influenced the sound of the album?

SE: Figure 8 is definitely developing its own little sound and I think I played into that a little bit. Just the sound of that room and the instrument collection. As far as a Brooklyn sound, I think Brooklyn is more about having a hustle and getting stuff done, and being around people who are inspiring you to do so.

NT: What were some of the musical touchstones for Premium?

SE: Sly Stones’ Fresh, Jackson Brown’s For Every Man, which was a record that totally bombed when it came out, but it had “These Days” on it which he wrote when he was sixteen. All Things Must Pass because George is kind of my guy, and Plastic Ono Band similarly. I like George and John’s solo output after the Beatles.

SE: I think the guitar is still a really fun instrument and I think there’s still a lot to be done with it. It makes a lot of sense for a lot of people. It’s really accessible. I’m not an anti-computer music person because we use computers every day. I kind of want to make a record on a computer too. But I have been really into the guitar lately.

NT: You’ve mentioned in the past that you have a great respect for the songwriting of Chris Cohen. Could you talk a little bit about what you admire about him and how you see yourself as being similar or different?

SE: I’m just a huge fan. There’s an undeniable goodness in his melodies and his narrative. His songwriting is so beautiful and you can tell he puts so much care into it. Going back to Runners Four with Deerhoof and before that The Curtains and the following Curtains records, you can hear that he keeps getting at the same thing. It just keeps getting better and better. It’s so striking. I think his last record was very beautiful. I think we sound different, but there’s no doubt that his music is part of the way that I understand music because I’ve been listening to him for so long. He’s also a really nice guy, which I think is pretty important.

NT: Could you talk a little bit about the inspiration for “I Need a Man”?

SE: I think it gets down to this thing that was happening, and is still happening, this imbalance in the genders. Women in the music industry totally suffering for years. People have to take to Twitter now to out their abusers, and I was just stewing on that. I wrote “I Need a Man” in kind of a subversive way because my voice is kind of androgynous and it can go either way. It’s really just like ‘I need the people around me to be better people, to be better men’. I actually wrote it right after the thing that happened with Amber. I was just feeling super pissed-off about it. A lot of people in my circle were intertwined with that too. I have friends who work for that PR firm. And then H22 was happening in North Carolina, which is where I’m from, and that’s just so frustrating because I always thought that it was a decent state and a good place to grow up. I’ve always known that racism and misogyny were there, but it’s frustrating that it’s so built into the government.

NT: Do you feel compelled to write that way often, from that political or outward-looking perspective?

SE: I think it’s a blend of personal and political. I don’t have a problem being political. I think music is coming back into that space where it’s no longer passé to talk about things that are real. I think that’s a really good thing. Obviously it’s a very personal record, and it’s definitely about my experiences because that’s kind of how I write, but I think as long as I keep feeling charged by these things I will probably write about them.

NT: Your music can be described as having an inherently American quality. What does being American mean to you right now?

SE: It’s funny because I don’t really identify strongly as being American. Especially with the way things are right now. Canada’s looking pretty good. But I suppose it’s lovely that I’ve met the people that I’ve met, and obviously I’m privileged. I play music and grew up as a white person, and didn’t face tribulations that most would elsewhere. It’s just about being privileged and recognizing that, I think. It’s not a pride thing at all. But it’s funny because American music, that can really go anywhere, arguably. I mean the Stones were making American music.

SE: So I guess the artists that I listen to are mostly American, although I have been on a big Caetano Veloso kick these past few weeks.

NT: Is there something about what you’re doing that is commenting on being American, or interacting with that in some way? Because there are certain elements within the arrangements like the pedal steel that do sort of evoke Americana.

SE: Yeah, I listen to a lot of country music, so that’s definitely built into my sound. Kind of this mashup of Neil Young and Jackson Browne and blending it somehow. Those are all things that I listen to quite a bit, and are sounds that I love. I’m OK with playing into tropes. That’s why I took a picture on a motorcycle, and made a video on a motorcycle, which is also very Americana. It’s fun to play into these things that exist, that people identify with. But I’m just using them.

NT: Do you see them as kind of a shortcut to be able to communicate with people?

SE: I don’t think so. I guess I’m just a 20th century music kind of person. That’s how I identify with songs- hearing them accompanied with drums, bass, guitar, keyboards… maybe a pedal steel. I’ve basically used the All Things Must Pass instrumentation and made it my own. Pete Drake plays pedal steel on that record and it’s so cloudy and in the background because Phil Spector covered everything in reverb… So I guess tropes are an avenue, but I don’t think I was necessarily aware of using them as a shortcut.

NT: You’re going out on the road soon. What are you hoping to achieve with the songs on tour, and what kind of response do you like to get from an audience? What’s a good show to you?

SE: A good show to me is looking out and seeing people looking back at you, and maybe not looking down at their phones. It’s really easy- I’d rather play for a room of thirty people that are quiet and listening than a couple hundred that are just not. I’ve been experimenting with bringing the sounds from the studio onto the stage and I’m having a lot of fun with it. I am an engineer, so I do have some tricks up my sleeve. It’s not going to sound like the record. It’s going to be different, but it’s going to be fun. I think trying to desperately re-create the record would be a little limiting because the guys I’m playing with are so good. It’s just going to be about them being confident and enjoying themselves and making it feel really good.