Interview With Danny From ‘Jacuzzi Boys’ 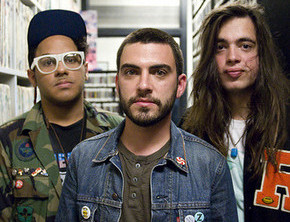 Northern Transmissions caught up with Danny Gonzalez from ‘Jacuzzi Boys’. The guys are presently on tour with ‘Waaves’ and ‘King Tuff’. Their self-titled album is now out on Hardly Art.

NT: Tell me about the cover art on your new self-titled LP. Who designed it, and what’s it all about?

DG: It’s from a collage that I made a long time ago. We experimented with many different things, and I think this one kind of worked. We really wanted to catch the Florida vibe, I think we did. The Crane with the rifle and the Platform boots really seemed to work. Gabriel designed the back of the album.

NT: You worked with the multi-talented ‘Kramer’ (Shimmy Disc) on the album. How did you guys end up working together?

DG: He wrote us originally and told us that if we ever wanted to make a great album we should hit him up. I really liked the stuff he did wit hother ‘Hardly Art’ artists. It turns out that he lived pretty close by as well, in Hollywood, FL. We were really surprised. He was super easy to work with and we’re pretty happy with how the album sounds.

NT: You guys have released split 7″s with many bands, including Vivian Girls, King Khan, and Nobunny. Who else are you looking forward to working with?

DG: I’m not sure that we want to put out any 7″s for the time being, haha. They are fun to do, and we have five or six songs finished that I really would like to get out soon. We did a song for a Seth Rogen movie, that was pretty cool. My mom was really excited about that.

NT: Florida is a unique state, the North and South are so different, almost like two different countries.

DG: It’s like one of those things. Miami is like its own island. We are really in our own world. I live in Little Havana, it’s really great, so much going on. It’s not really known for rock, but more for hip hop, which we all love anyways. Actually, Torche are from this area. We dig them, they’re pretty great. I’m hoping to do a show with them.

NT: The band’s sound has definitely evolved since the days of “No Seasons”. Did you focus on writing more cohesive songs and becoming tighter as a band?

DG: No, I don’t think it was a conscious decision entirely. We have played and recorded with the same people for quite a long time. We are also never afraid of talking about new ideas, which really is the only way to put out new and interesting songs. Hopefully the next album will be a departure as well.

NT: The tour with Wavves and King Tuff seems like a great fit for you guys. How’s it been going so far?

DG: The other night, I smashed my thumb. I’m not sure how it happened, but It was pretty ugly. Funnily enough, I’m not sure how the whole thing came together. The crowds have really been great to all the bands. So far, everything has worked out. The guys in the other bands are really cool as well, it’s been fun hanging with them.