“I Don’t Really Care For You” By CMAT

CMAT’s single “I Don’t Really Care For You.” is “inspired by the sounds of American country singer Charley Pride and Swedish pop icons ABBA, Dublin artist CMAT’s latest offering is a charmingly relatable rumination on swallowing your pride and acknowledging your faults in a past relationship.”

“Realising you were ultimately the bigger dickhead in a relationship.” she continues “I was thinking about how superiority always insists upon itself. Good people will always think they were doing the right thing in the moment, even if their actions are terrible. I try really hard to be a good person, but I still end up being a big bully sometimes. If you ever find yourself saying something along the lines of, ‘I would love him IF…’ or ‘I would stay with you IF…’ then… you’re probably being a dickhead.’ She continues, “Musically, I went to my producer Oli with the vague concept of, ‘What if this song was ABBA doing a spaghetti western soundtrack?’ and he just knocked it out of the park. I was also listening to loads of Charley Pride around that time – and the backing vocals in the pre-chorus are directly inspired by him. Rest In peace king!”

Her work to date exemplifies CMAT’s penchant for crafting humorous songs about serious topics; her succinct, sharp words tell tales of fast food shop breakdowns and kitchen sink dramas; needling former lovers while mainlining Diet Coke; laying bare specific childhood disappointments over a stupidly catchy chorus, forcing you to do a double-take while an optimistic sax solo breezes in: ‘Did she really say that?’ They are informed by her schooling in the works of Dolly Parton, Charli XCX, Loretta Lynn and Cate Le Bon followed, alongside copious research into RuPaul’s Drag Race, music TV of the 70s and 80s, the life and works of Anna Nicole Smith, Dublin’s drag scene and celebrity socialites London/LA between 1999 and 2009, all resulting in CMAT: an alternative pop star for an alternate universe. 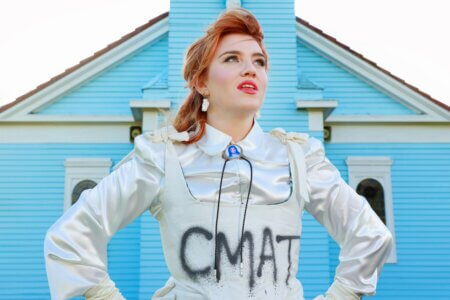 “No More Virgos” By CMAT