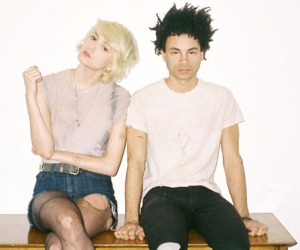 Brooklyn band Hunters are excited to announce the release of their debut album HUNTERS on September 24th via Mom + Pop. Recorded at  Electrical Audio Studios in Chicago by Greg Norman (Kim Deal, Jason Molina, Pelican, OM), HUNTERS is ten tracks of screeching guitars, thundering drums and dueling vocals that create an undeniable nod to 90s grunge, punk and 00’s noise rock.  Derek Watson and Izzy Almeida have made an album that captures the intensity of their notoriously brutal concerts that often end in a violent fury of guitars and bodies strewn across the stage.

Rounded out by Gregg Giuffre and Thomas Martin on drums and bass, Hunters have shared the stage with bands such as The Kills, METZ, Bleached, JEFF The Brotherhood and A Place To Bury Strangers. This summer they will open for Hunx and His Punx as they embark on a string a dates in August. The tour kicks off on the 9th in Philadelphia before winding its way up and down the Eastern US, wrapping up on Boston on August 23rd.