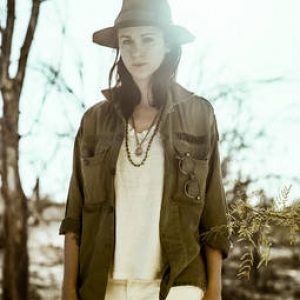 The video follows Holly as she visits The Integratron in Landers, CA, a sonically perfect space originally built for time travel in the 50’s. Holly and friends receive a sound bath that sends her into a dreamy astral projection through the Joshua Tree desert. The video captures the spacious vibe of the song, showcased against gorgeous time-lapsed night sky and underwater shots. She is carried through scenic landscapes by gorgeous transitions all centered around the elements; earth,water, fire, wind.

Holly Miranda grew up singing in church, she began piano lessons at the age of 6 and taught herself guitar at 14. She wrote her first song shortly after. When she was 16 she moved by herself from suburban Detroit to New York City. Her first gig was at the infamous Sidewalk Cafe on 6th street and Ave A in the East Village. There she cut her teeth along side Sidewalk alumni’s such as The Moldy Peaches, Nicole Atkins and Beck. She recorded two solo albums during this time and self-released one “High Above the City,” which she sold online and at shows. She began touring the east coast performing solo at cafes and coffeehouses.

In the early 2000’s while recording her next record at Headgear studios in Brooklyn, she and the producer, Alex Lipsen, decided to release the record as a band effort. This was the beginning of the shoegazey indie-rock band The Jealous Girlfriends. The band released two albums and performed with such acts as Shudder to Think, Nada Surf, Metric, and Sea Wolf. Holly continued to perform and tour solo between TJG tours. During this time she began writing songs for her first worldwide released solo album ‘The Magicians Private Library’. Produced by TV on The Radio’s Dave Sitek, TMPL came out on XL recordings in 2010.

Holly has toured extensively and played with such acts as Tegan and Sara, The XX, My Morning Jacket, Florence and The Machine, Tv on The Radio, Vampire Weekend, The Antlers, Oh Land and Lou Reed. She has performed at the Sydney Opera house as part of the Vivid Festival, Hyde Park with Sydney festival, Lattitude festival, Celebrate Brooklyn at Brooklyn Bandshell. She has had music placed on multiple t.v. shows such as Gossip Girl, Grey’s Anatomy, CSI:Miami, and The L-word.

Holly has contributed vocals and songwriting on records with Theophilus London, Nada Surf, Mmoths, Cicada, Steel Train and more. In 2012 she joined ‘The One and Only Singles’ playing bass guitar and providing backing vocals, the band is an all female pop collaboration fronted by Scarlett Johansson.

Holly is currently recording and producing a new solo album in Joshua Tree and Brooklyn.