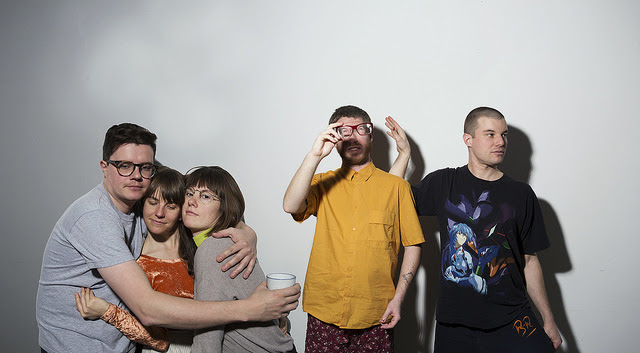 Bernice have shared “He’s The Moon” ahead of the release of their new album Puff. “We recorded this song at the Banff Centre, so we were very spoiled with gear and grand pianos and microphones and wonderful people with lots of ideas. But we wanted a song with lots of space, to give room to the mood,” Songwriter/vocalist Robin Dann explains. “I wrote this song about an afternoon I spent with some great friends on the Magdalen Islands, off the coast of PEI. We just wandered around. We played shoe fling. As I wrote the song it evolved to encompass some other meanings as well, bigger thoughts, but mostly I was remembering seagulls flying past my head, and grass bent under the wind, and ocean all around.”

Born to a musical family, the daughter of a symphony harpist and the former Toronto Symphony Orchestra’s principal violist, and a graduate of Goldsmiths’ MA in Music, Bernice’s Robin Dann’s background, formal training, and experimental sensibilities developed into Bernice’s sparse arrangements and pop-minded songwriting, often following curious and unexpected paths.

Additionally, Robin Dann today announces Soft Chew – a new podcast created by Dann and Gabrielle Leith that launches June 1 and explores the online phenomenon of ASMR (Autonomous Sensory Meridian Response). Each episode will take you on a sensory journey through the world of some of the community’s most revered, eccentric and prolific content creators.

“ASMR connects a few dots for me, as a musician.“It accomplishes something so wonderful through sound that I continue to search for with Bernice – how to use sound to help? Not just to feel good or inspired, but to literally be healed by the power of sound. When I watch ‘Latte ASMR’ doing ‘6 different tapping sounds’, my head tingles and I can feel good things happening to my whole system. This, for me, is the wonder of ASMR – these artists are tapping into a really powerful neurological process that just happens to us involuntarily when we watch it! When Bernice plays shows, we aren’t performing ASMR – we’re playing songs. But I do believe that there is a lot of good stuff that happens in the brain and body when a live show works really well.”

Puff was recorded from album to tape at Breakglass Studios in Montreal, the band fell in love with the open spaciousness of the studio and how much it allowed them to connect whilst performing. “The vocal booths have sightlines to the band room through windows. We did live takes of each song to tape. We could look at each other, try different things, mostly we got each song in a few takes,” said Dann of the recording process.