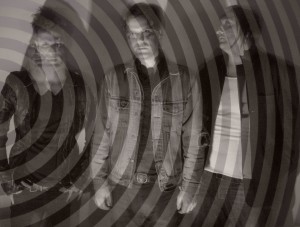 Share on TwitterShare on PinterestShare on PocketShare on RedditShare on FacebookShare on Email
Goodnight Records is excited to announce the release of Heaven’s debut album Telepathic Love, out July 30th, 2013. In celebration of the new record, Heaven is debuting a covers EP, featuring “Bizarre Love Triangle” by New Order, “See My Friends” by the Kinks, and “Go Your Own Way” by Fleetwood Mac, avail. The first track off Telepathic Love, “Colors in the Whites of your Eyes,” is also available above.

The Brooklyn-based dream pop outfit formed in late 2010 by Matt Sumrow (Dean and Britta, The Comas, Ambulance LTD) and Mikey Jones (The Big Sleep, Swervedriver, Snowden). Galvanized by recent sessions backing Adam Franklin as a part of his Bolts of Melody band, both recording and touring 2010’s I Could Sleep for a Thousand Years, the pair was inspired to compose and record some original songs of their own. With Sumrow on guitar and vocals and Jones on drums, the duo filled out the lineup with Ryan Lee Dunlap (Fan-Tan) on keyboards. They honed their sound with extensive touring, including a jaunt with Swervedriver. Sonic teasers were previously offered in the form of a split single with Adam Franklin & Bolts of Melody, which was the world’s introduction to “Colors in the Whites of your Eyes,” and their eponymous 7″, which featured “Mountains Move” and “Falling Apple.”

1. Colors in the White of Your Eyes

3. Go Your Own Way – Fleetwood Mac