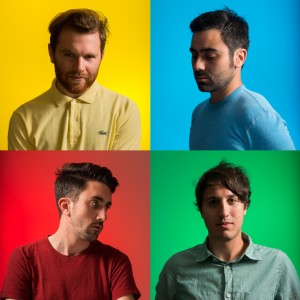 Hands premiered their official video for “Brave Motion” from their debut full-length Synesthesia out now on Kill Rock Stars. The video was directed and animated by Johnny Woods with layout and additional rigging by Ricky Calvit Jonsson Jr. “There’s an unfiltered sense of kinetic energy that grounds “Brave Motion,” (and the other nine tracks on Synesthesia), which finds a perfect counterpoint in the blown out colors and motion trails on display in this fantastic video.” Hands recently announced a summer tour, which begins later this month. The tour will make stops in major cities including New York, Atlanta, Chicago, Washington, D.C. and more.

For now, Hands’ graceful and danceable indie rock is still under the radar,  but they are quickly rising to the surface, bringing their melodies and thumping beats with them.  Hands has built a devoted following for their evolving palette of sounds, soaring melodies, and complex looping song structures. With overwhelming responses to first listens of Synesthesia.