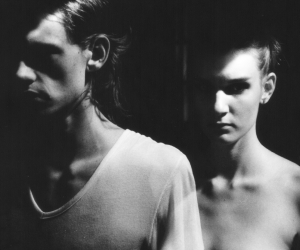 One of this year’s breakouts at New York’s CMJ, GEMS are today excited to share details and the full tracklisting of their upcoming debut EP, Medusa, out digitally November 12th, 2013.

The DC-based duo comprised of Lindsay Pitts and Clifford John, GEMS have developed their own brand of intoxicating, cinematic dream-pop that is at once, both deeply heartbreaking and romantic. The four tracks on Medusa weave a dark web of intimate male and female vocals, hazy guitars and lush synthesizers, with songs that are tragic, haunting, and tinged with melancholy and existential longing.

With newest single “Medusa,” an emotionally laden vocal take from Pitts, a guitar line that hangs glittering in space, booming low-end rhythms that bloom like black dahlias. Rich with dark, doomed glamour, the song proves worthy of its namesake, the serpent-haired Greek mythical creature who could turn humans to stone with her direct gaze, as ‘Medusa’ is nearly as transfixing.”

In anticipation of Medusa‘s release this November, GEMS will play two record release shows at Music Hall of Williamsburg in Brooklyn and U Street Music Hall in DC.