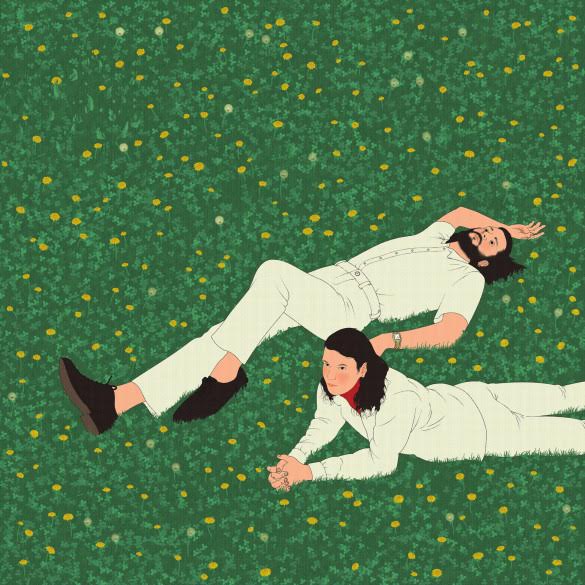 Feng Suave have Debuted a video for their wonderful and catchy track “Unweaving The Rainbow Forever.” Inspired by the sounds of Bill Withers, and modern artists – Weyes Blood, Father John Misty, and more.

Speaking on “Come Gather ‘Round”‘s accompanying visuals, the band added: “In the video, we can be seen as your quintessential stock-market wolves on a coffee-break-turned-shopping-spree before taking the elevator back up to our corporate headquarters where we secretly pull the strings on world affairs with our lizard acolytes. We filmed the video one opportune day with Bob Sizoo, ridiculously trotting around Amsterdam in full costume, trying our luck with local shopkeepers.”

The recording and production of the band’s upcoming third EP ‘So Much For Gardening’ was overseen by the band themselves, alongside engineer Jasper Geluk (Altın Gün) and recorded analogue to tape at Helmbreker Studios in Haarlem, just outside of Amsterdam. All instruments were tracked live with the help of Feng Suave’s dear friends and live band consisting of Kike Zwagerman, Ivar Otten en Gino Buragevic.

Feng Suave (aka Daniël Schoemaker and Daniël de Jong) to date have released 2 EPs: their 2017 eponymous debut, and 2020’s ‘Warping Youth’. Across the two projects the pair have accumulated upward of 150 million streams, supporting Khruangbin and Alex G. Feng Suave have been praised by Iggy Pop and Lauren Laverne any more.

“The verses reference animal imprisonment, climate change, nuclear winter as well as human superstition and include a nod to the famous environmentalist David Attenborough and Jane Goodall. It’s kind of a children’s song about humanity’s self-annihilation. It will be the first song in the Feng Suave catalogue that features a glockenspiel and a live string ensemble.”