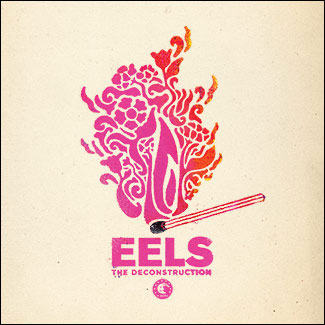 When you’ve been making music long enough, taking huge steps is what helps you stay in the game. For EELS, upping their unusual production, cinematic tendencies and a unique arrangement of orchestras makes for a powerful sound. Though their writing doesn’t always hit the same highs, it still manages surprise you more often than not.

In a wash of arpeggios and hip hop, the album opens with the trippy energy of “The Deconstruction” with its orchestra instrumentation falling in and out stylistically. Though its first chorus doesn’t quite nail the right dynamic shift, it more than makes up for that as the song goes on. EELS sense of mysterious classy rock gets Western tones on “Bone Dry,” as they mix heavy distortion with a wondrous bit of psychedelia. As they move into the next phase of the album however “The Quandary” sets things up like an interlude in a Sergio Lione picture.

“Premonition” slips into a much folksier, and guitar-driven sound that lets its slow-bleed of harmonies take the place of the usual layers of instrumentation. Though this is an interesting shift, “Rusty Pipes” makes it clearer that EELS bring much more in their dense productions. Every bass line slinks with a cool energy and let the flute hooks feel epic. As they seem to step out of an old movie to get their point across, “The Epiphany” feels like a plea in a strange fourth-wall-breaking way, that feels magically personal.

The bass of “Today Is The Day” hits as hard as other tracks on the album, but with a much more upbeat energy and one that really drives the song. Hearing the band interpret these similar styles of instrumentation into so many different arrangements is truly fascinating, especially going into the cinematic sweeps of “Sweet Scorched Earth.” Using its fantastical sounds and lyricism to pretty up a clearly menacing tale, the song creates a haunting disconnect that leaves you hanging onto to every word. EELS slip forwards again on the thematic energy of “Coming Back” as they let strings soar as bird cries fall into a time-warped loop.

“Be Hurt” straddles its derivative base to let its atypical instrumentation really bloom out, and give the writing a fresh face. Despite all its brilliant and unusual blend of sounds, it does tend to suffer from the way the song just seems to loop on one progression. There’s an energy however to “You Are The Shining Light” that makes its similarly familiar writing really pop instead of fizzle, as the band really ups the production and punches of distortion to make the song stand out. “There I Said It” is wonderfully intimate in its writing and lyricism, but in the scope of the record does feel like it isn’t saying as much.

In its cute little lullaby, “Archie Goodnight” manages to keep things brief and very focused to take the problems of “There I Said It” and move on before anyone minds. “The Unanswerable” floats in a sea of synth lines that slowly burn into a powerful roll of drums. Though they seem to be a little more suited to the early half of the album, they lead into the religious energy of “In Our Cathedral” surprisingly well. It slowly subverts its swell into something cosmic and at times feels like it might burst into a more menacing attack of orchestration.