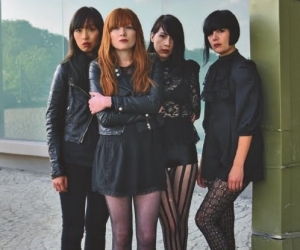 Sub Pop have shared the release details of Dum Dum Girls third album Too True, available on CD/LP/DL on January 27th in Europe and January 28th in North America via Sub Pop. The 10 track album features the singles “Lost Boys And Girls Club,” “Are You Okay,” and ““Rimbaud Eyes,” and was produced by Richard Gottehrer (Blondie, The Go-Go’s, Richard Hell), Sune Rose Wagner (The Raveonettes) and engineered by Alonzo Vargas at East West Studios in Los Angeles and The Coven in New York City.

Too True’s leadoff track “Lost Boys And Girls Club” is the subject of a new video, directed by Cody Critcheloe (of SSION), which premiered earlier today through an initiative with H&M Life, a new project where young artists from different parts of the world produce music videos with the support of H&M.  All videos will premiere on H&M Life, with Dum Dum Girls “Lost Boys And Girls Club” as the first in the series (see H&M Life October 31st).

You can now preorder Dum Dum Girls Too True at Sub Pop.com. While supplies last, orders of the CD and LP will receive a free, limited-edition 7” single featuring “Rimbaud Eyes” on the A-side, backed with the non-album track “Girls Intuition” on the B-side. There’s also two brand new Dum Dum Girls t-shirts that will be available as a premium bundle with CD or LP purchases.