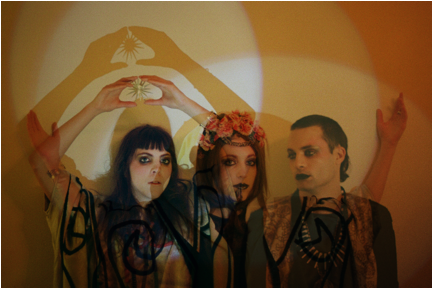 Following the announcement that electro-psych group DOOMSQUAD will release their sophomore LP Total Time on April 29th Via Bella Union (Hand Drawn Dracula in CA), and additionally, sharing first track “Solar Ass”, they have debuted the second track “Pyramids On Mars”. The track starts sparse and intentioned, swelling into a trance-y, percussion-driven apex that blurs psych-y vocals and multidimensional rhythms into a sonic mind-meld. DOOMSQUAD have furthermore announced a short spread of US Tour dates, including shows at SXSW.

In 2010, what began as sandpaper-cheesegrater folk music swiftly shifted genres as siblings Trevor, Jaclyn, and Allie Blumas began to explore trance and electronic beat making. Their shared fascination with dance culture, rhythm, and the unknown, along with their lifelong immersion in the arts, began to manifest as a collective ethos. Before long, DOOMSQUAD had mushroomed into a full-scale art project.

This year will see the release of DOOMSQUAD’s release Total Time, out April 29th on Bella Union and Hand Drawn Dracula. Inspired by some of their favorite artists — Georges Bataille, Richard Tuttle, Tanya Tagaq, and Genesis P-Orridge — the band travelled to the New Mexican desert to write and record. Moving through their own circadian rhythms, they fell into aural harmony while experiencing the passage of time solely as beats per minute. Total Time is all time.

Upon returning home from New Mexico, the band continued to draw inspiration from the Toronto arts community, which is vast but extremely supportive and close-knit. Their friendships and connections led to some fortuitous collaborations, including one with Canadian avant-garde legend, Mary Margaret O’Hara, whose otherworldly vocals grace ‘The Very Large Array.” The driving, dirty bass lines, and analogue layers of effects come care of Graham Walsh (Holy Fuck), who produced and mixed the album.

The record features a number of other contributors: Mike Haliechuk of Fucked Up plays guitar. Industrial noise experimenter David Foster aka HUREN offers vocals on “Russian Gaze.” Colin Fisher and Brandon Valdivia of free-jazz duo Not the Wind, Not the Flag bring instrumentals. And galactic twins Josh and Jesse Hasko, who perform together as North America, are a crucial part of Total Time as well. Over the years, the connection between DOOMSQUAD and the twins has deepened and this summer they’re joining forces: the Haskos are becoming members of DOOMSQUAD’s live act, which will take it further than it’s ever gone before.