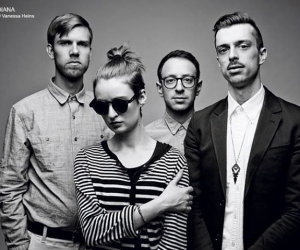 For DIANA’s music video for “Perpetual Surrender,” artist Jesse Yules experimented with folded paintings of lead singer Carmen Elle. “I used images with a strong, singular light source, that cast a shadow on one side of the figure. I tried to illustrate the idea of a personality with different sides, by mirroring and animating the lit side of the portrait, then contrasting that by mirroring the shadow side of the portrait.”

Perpetual Surrender, the debut album from DIANA, will be released on August 20th in the US (19th in Europe).

DIANA will perform live on a bi-coastal tour with Austra starting on August 30th in Detroit. Click here to watch the band perform “Born Again” at the University of Guelph while on tour earlier this year with Tegan and Sara. More dates in the UK and Europe will be announced soon, and all of the confirmed dates are listed below!