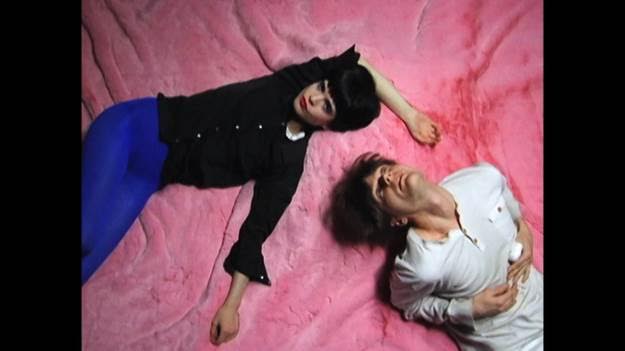 Earlier this week, Montreal’s She-Devils premiered “You Don’t Know” via the Strombo Show on CBC, and today, a week ahead of the release of their eagerly anticipated self-titled debut album, they are pleased to share the new video for “Hey Boy” courtesy of Hero Magazine. The duo directed the video themselves, as with all their videos, and this focused vision creates a style that is very much in tune with the song. Bright and bombastic colours influenced by the art of Yayoi Kusama, 90s kids TV and 60s ye-ye music videos (a la Brigitte Bardot and Serge Gainsbourg in Comic Strip).

Through primitive electronic gear, hypnotist vocals, and an “amusement park of sounds,” Kyle Jukka and Audrey Ann Boucher construct a fun-house world of beautiful chaos. The music is built from original sonics inspired by everything from Iggy Pop to Madonna to T-Rex to Can, as well as the romantic longing of ‘60s yé-yé.

The pair met four years ago while living at a music rehearsal space in the Mile-Ex neighbourhood of Montreal. The band played gigs for about eight months though they did not record right away. Making music together meant creating their own rules and taking things one-step at a time. Following instinct is a crucial part of She-Devils’ identity.

Striving to make music that feels “as visual as possible,” the band hopes to strap listeners into a rollercoaster ride “with Audrey’s voice as the centrepiece to cling to.” The duo are inspired by the cinema and art of Gregg Araki, Yayoi Kusama, Andy Warhol, John Waters, and Quentin Tarantino. They direct their own videos. Audrey creates the artwork that accompanies the music. Her self-taught style evolved by watching hours of Disney movies, The Simpsons, and Powerpuff Girls.