3 days ago
Words by Robert Duguay 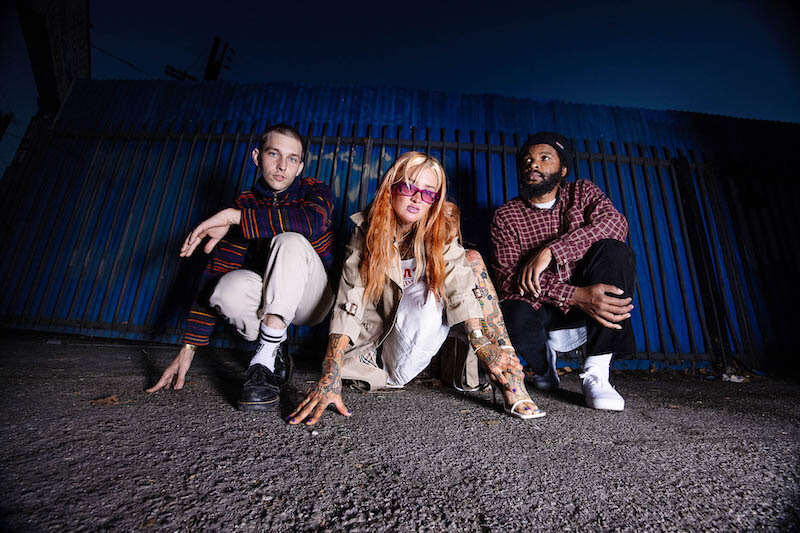 When music is being created with a clear-minded and innovative approach, literally anything can happen sonically. Sounds that were never thought possible occur and the uniqueness of it all is usually appreciated by the listener. With a distinctive blend of modern indie pop and vintage rock & roll, Chicago’s Dehd accomplish this by making music for the current generation.

Their fourth full-length release, Blue Skies, came out via Fat Possum Records back on May 27 and it’s created a ton of buzz. They’ve been selling out shows in New York City, Los Angeles, San Francisco and Austin and it seems like the trio of Emily Kempf, Jason Balla and Eric McGrady are on an upward trajectory that isn’t stalling anytime soon.

Balla and I had a talk about the making of the album, handling the production side of things, making things up as he goes along and focusing on live shows.

Northern Transmissions: How would you describe the making of Blue Skies? Did you, Emily and Eric feel like you were pushing your own artistic boundaries in order to make something fresh?

Jason Balla: I think it kind of started as any other where we were just kind of writing in the practice space, especially since we were coming out of a period where we were taking some time off because of the pandemic and everything. Things felt super fresh and I feel like we had some new ideas going into it that felt like the experience of making music for the first time but with everything we’ve learned, if that makes sense. It was definitely a good reach for our creative arch and once we had the songs written we really tried to expand them a bit in the studio with textures and working the arrangements. In the last record we had already started working a bit with electronics but I think on this one it became much more of a fully integrated machine, especially with Eric. He became a true android by the end of it.

NT: You also produced the album, so how did you approach that side of things during the recording process where you’re producing your own band?

JB: It’s just a natural extension of the songwriting, I guess. I’m really fortunate that Emily and Eric trust me a lot to roll with a bunch of ideas, regroup, decide what we like, see what works and kind of shift from there. There’s a lot of freedom and honestly it’s what the band sounds like in my head that I’m trying to put into recorded form.

NT: Did you learn how to produce by yourself or did you go to school for it?

JB: I’ve been making this shit up as I go along (laughs). I’ve recorded all of the records that we’ve done with the exception of our first tape so as far as recording goes I’ve learned mostly just through doing it. I’ve also been slowly building up a studio over the years while recording a bunch of stuff at my house, some of the last two records have been done at my home studio along with other projects on my own. I think it’s just listening to what other people do and trying to figure out the tricks.

NT: Dehd has an intriguing sound due to how there’s a mix of indie pop with a rock & roll swagger which comes from both you and Emily’s influences. You like Cocteau Twins and bands like that where Emily likes Roy Orbison and James Brown. When it comes to
writing the songs, how do you manage to fuse these styles into one that the band identifies with?

JB: It’s kind of an organic process where we’re kind of a particle accelerator or something with each of our imprints on the music getting smashed into the jam. Each of us have a pretty eclectic music taste which goes from dance music to quiet, melancholy folk singers to rock & rollers and everything in between. I think it all comes out in weird ways through different parts of our personality.

NT: I definitely notice how it comes out in weird ways, you said it perfectly with how it’s a particle accelerator where all these different styles get mashed together to form a cohesive sound. With Blue Skies being the band’s fourth full-length release, what do you think makes it stand out from the rest of Dehd’s discography?

JB: Aside from us thinking that it’s the best record we’ve made, it’s a culmination of learning how to do this from the beginning. Every stage of the band has its charm but we’ve hit this place where we learned how to maintain the charm while polishing it up enough. It’s about how we can be the best communicators, which is something that we work at in the band as well in our songwriting process. We aim to give each other space to kind of follow an idea without killing the inspiration or something like that and I think with this record and where we are at, how we operate is pretty much the same way. We look to find the best way to communicate these feelings and images because a lot of the way that we write is centered around these little pictures or impressions. We’re not telling some kind of story in a Bob Dylan kind of sense, but we look to figure out how to best transfer that to the audience.

NT: Since the album has already been out for a couple weeks, do you have any other projects you’re working on to follow it up or are you just focusing on touring for the time being to get the record out there?

JB: The live thing is really important. I think in the band we wear the two hats of studio and stage and they definitely inform each other. We can spend a month in the studio and by the end of it you want to see daylight which is kind of the same thing with touring, by the end of a run you want to get back into the studio. Right now we’re focusing on playing shows and it’s been amazing getting back into touring in general while feeling the energy people have in all the rooms.