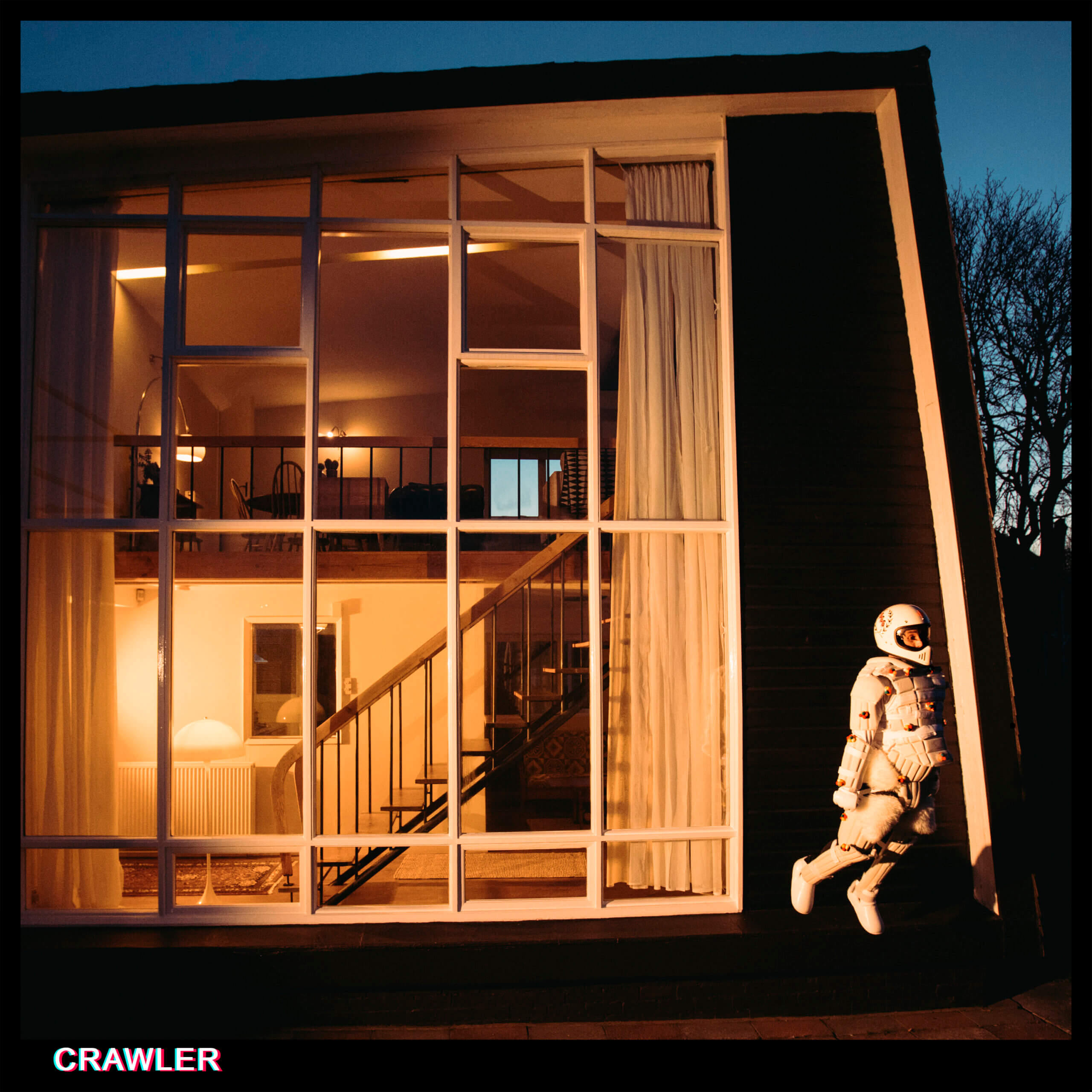 Five years, four albums; IDLES clearly don’t sleep much. With album three ‘Ultra Mono’ having only just landed in September 2020, this year finds the Bristol noiseniks readying another LP, ‘CRAWLER’. For a group big on self-love, the importance of community and an emphasis on positivity when faced with adversity, the five piece are probably the best band in the world to offer up a slice of catharsis in the midst of a pandemic. They approached their new record with two objectives; one, to act as an outstretched arm of comfort in these challenging times; two, to dismantle of the notion of IDLES being a ‘rock band’. The band’s consummate frontman, Joe Talbot reflects on ‘CRAWLER’s overarching emotions with “we want people who’ve gone through trauma, heartbreak, and loss to feel like they’re not alone, and also how it is possible to reclaim joy from those experiences.” Speaking sonically about the group’s new body of work, which was co-produced by Kenny Beats and IDLES guitarist Mark Bowen, Joe states, “I don’t really see us as a ‘rock band’ and working with Kenny (Beats) freed us of the idea of genre. On this album, our dissolution of ego was helped by Kenny’s humble nature and willingness to learn. He has boundless passion for making the best song possible. Not the best ‘rock’ song – the best song possible”. Talbot goes on to emphasise the inspiration behind ‘CRAWLER’s lyrics “It was writing selfishly that helped make it possible. Reflecting. Telling my own story. Not trying to tell everyone else’s story. Not trying to fix the world – just talking about how I am fixing mine.”

While ‘Ultra Mono’ and ‘Joy as an Act of Resistance’, IDLES’ sophomore release, are accomplished albums and have helped pave the way for the group’s completely warranted and justified ascent to becoming a bona fide important band, they unwittingly positioned the group close to self-parody and with a cartoonish persona, ‘Ultra Mono’ particularly. Fundamentally the fivesome trade in unabashed humour (at times) and raw emotion, mixed with unrelenting, cathartic rage. With ‘CRAWLER’ they’ve stepped back from being overtly comedic for something that still maintains their wit and charm but not dumbed down. Sonically too, their fourth album feels denser in parts and, dare I say it, experimental. It feels like they’ve captured the raw intensity of their debut album ‘Brutalism’ and mixed in the best parts of their later releases, while still pushing themselves forward.

It’s evident from lead single ‘The Beachland Ballroom’ that IDLES have reached a point where they want to challenge themselves, to step out of their comfort zone and explore new avenues but with their own twist. It’s been said that Talbot has been attempting to write his own “Be My Baby” for years and ‘CRAWLER’s first offering hits that proverbial nail on the head. In a meeting of disparate minds, it’s the Bristolians adopting a 50s pop-cum-soul aesthetic, even down to the elegant sway of organ. Then front and centre you have Talbot crooning like a lounge singer teetering on the edge of collapse, flitting from weathered dulcet tones to something more guttural and raw. If ‘The Beachland Ballroom’ sets the pace for IDLES’ very own ‘Tranquillity Base Hotel and Casino’, the record’s second single ‘Car Crash’ fucking decimates that notion. Having professed a ‘Yeezus’ influence in the making of ‘Brutalism’, ‘Car Crash’ channels the anarchic discordance of that landmark record with an added dose of Death Grips’-esque chaos. Squalling dirty feedback howls, scrunched up electronics and fierce drums, it’s a celebration of cathartic, violent noise, which has Talbot proclaiming ‘I am the prophecy/I did not come from nothing’ like a deranged preacher. Suffice to say, with those two singles acting as a sneaky peak, they indicate the gloves are off as far as ‘CRAWLER’ is concerned and you’d better believe it.

True to Talbot’s word ‘CRAWLER’ is full of the “the best song possible” instances; from opener ‘MTT 420 RR’, a song constructed around minimal techno and an icy atmosphere that’s a million miles away from the usual IDLES raucousness. There’s a claustrophobic intensity that keeps a firm grip on the record’s curtain raiser and this is exemplified by the ambiguous but no less striking lyric “it’s raining glass like a fever storm/every promise I’ve sworn tonight”. Opposite to ‘MTT 420 RR’s digital melancholy you have ‘Stockholm Syndrome’s spasmodic release of tension as Adam Devonshire’s bass and Jon Beavis’ drums amalgamate with a machine-like metal on metal groove. There’s a theme of governmental frustration in amongst the band’s revving death march, as Talbot barks “he’s a nihilist quaking on a mound of slaughtered kings” while “just suck the marrow boy/don’t bite off what you can’t chew” as if to depict someone well out their depth, making a shit job of their current position *cough* Boris Johnson *cough*.

‘The Wheel’ is where a punk rock swagger communicates the unbreakable cycle of a toxic routine while ‘Meds’ is a danceable, yet off-kilter Stooges-like splurge dedicated to chemical dependency “drugs lost what I had found/burnt friendships to the ground/turned my frown upside down”. If there’s a brace of songs that embody ‘CRAWLER’ it’s ‘Progress’ and ‘Wizz’ found towards the record’s latter stages. The former; a Radiohead-style melange of dislocated electronics that seemingly have been assembled and reassembled into what we know now. Sonically the track squirms through fuzz and discordance to something more serene and back again, as Talbot’s disembodied voice murmurs "I don’t want to feel myself come down”. Then we have the latter, a 30 second blast of frantic hardcore punk that’s just beautiful, blind fury. Bringing ‘CRAWLER’ to a close, after ‘Wizz’s audio bludgeoning, is another skilled 1-2 of ‘King Snake’ and (the rather aptly titled) ‘The End’. With self-depreciation dialled up to 10 (and let’s be honest, this song dances close to the cartoonish persona mentioned earlier), ‘King Snake’ embraces a post-punk funkiness as Talbot tears himself down “I’m the god of zilch/a vacuum of thought” and “the jack of fuck all/the master of none” while the song scurries along with rubbery playfulness. Album closer ‘The End’s wall of discordant noise is the antithesis of ‘MTT 420 RR’s ambience, as Talbot regales us with soundbites of resilience and strength, like you could wear these words as armour and take on the fucking day. “Strong like an ox/bruise like a peach” illustrate the hard skin we need to form to face the world while “in spite of it all/life is beautiful” strikes a chord that only IDLES can – ‘Joy as an Act of Resistance’…indeed. 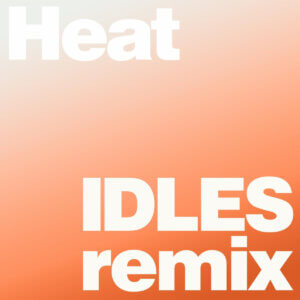 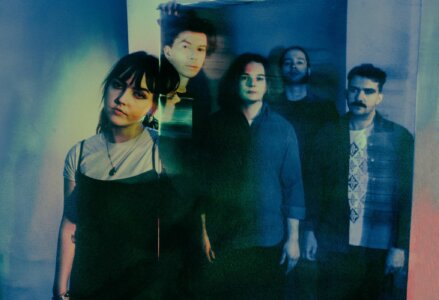 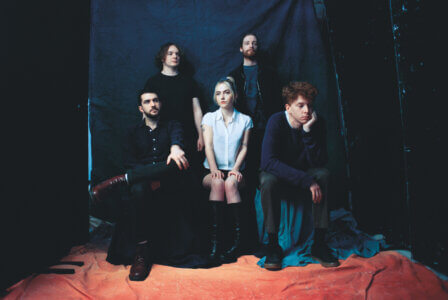