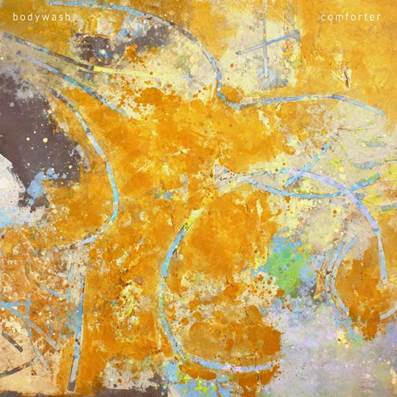 The Canadian winter seems to be the perfect time of year for artists to collaborate and create some amazing work. When it’s too cold to go outside, it’s nice to find yourself in a room working with likeminded people, besides what other options do you have during the more frigid months of the year. This seems to the case with Montreal’s beautifully dreamy Bodywash. Lead vocalists Chris Steward and Rosie Long Decter met as students while attending McGill University, and have blossomed into a five piece dream pop outfit, have crafted a wonderfully hazy debut full length, Comforter, which will be out in the world August 30th via Luminelle Records.

The lush album kicks off with lead single “Reverie” and a strong and steady motorik drum beat that holds together some wonderfully hazed out guitars and Steward and Decter’s subtly washed out vocals. It’s a nice solid start to the album and one that certainly sets you up for what’s to come. “Twins” hits you a little bit harder with its strong beat and an extremely hooky synth line that pops in and out of the proceedings. While, at this point, the record may seem like all it has to offer are the blurry dynamics of bands like Beach House and Wild Nothing, it becomes apparent that Bodywash aren’t content to be a simple one trick pony. As evidenced on tracks like “Paradisiac” with it’s slowly elevating electronic buildup and subsequent breakbeat, which wouldn’t be out of place on latter day Radiohead albums, and the wonderful “Eye To Eye” with its almost Brit-Poppy esque bridge and a pulsating bass line that will most definitely leave you swaying and coming back for seconds. There’s the Tame Impala like “Reprise” with its loopy feedback that closes out the short track and album namesake, “Comforter” with it’s atmospherically sinister start that opens up into a beautiful widescreen wash. All of this culminates with six minute album closer “Atmosphere” that brings the whole listen to a charming finale. The song takes its time before bursting open with a double time trip hop drumbeat that eventually collapses in on itself to reveal the dreamiest of guitar parts.

Though it seems as if Bodywash is taking its cues from like minded bands that came before, “Comforter” eventually stands on its own as the work of a band that is comfortable with experimenting and that crafts a journey that is not only a delight to revel in but one that, upon repeated listens, will divulge new and interesting ideas that make this band one to definitely watch moving forward.