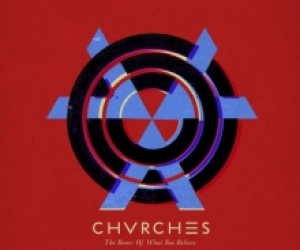 Album: “The Bones Of What You Believe”

“The Bones Of What You Believe,” the debut album from CHVRCHES, is like setting their recently popularized sound into cultural stone. Sure, there was their first song from last May, but this album is what will truly represent their captivating sound.

And if you’ve never heard of CHVRCHES, you should know that lead singer Lauren Mayberry’s vocals will captivate even the most bitter opponent of synth pop. Mayberry proves her talent and thought-provoking lyricism throughout the entire full-length LP. And those lyrics, accompanied by uplifting, synth heavy melodies, takes CHVRCHES to the point of pop bliss, with only a dash of subtle cheesiness.

Of course, CHVRCHES has been performing across the UK, including their home country of Scotland, Europe, the US and Canada since the release of their first smash hit “Lies.” So if you’ve been paying attention to the festival circuit, you’ve most likely seen their name at some point or another. What you may have not realized, is just how talented these three young musicians are. And if there is anything that’s going to prove that to you, it will be the release of “The Bones Of What You Believe.”

But it’s not all pop extravaganza throughout the album. Of course, the natural hits like “Lies” and “The Mother We Share” make for big hits. But its the more subtle tracks on the album that define the group’s robust sound. Tracks like “Recover” and “By The Throat” really shine on “The Bones Of What You Believe.” These tracks show an extensive instrumental ability, and on top of Mayberry’s usual stellar vocals, supporting vocals that really enhance the presentation of their music.

Of course, there’s only so much the album can do to win over dissenters to the style. If you’re not one that can support shiny synth pop tunes throughout an entire 12-track LP, then you may not enjoy this album in its entirety, but I’m sure there are at least two tracks that will make a mark on even the grumpiest of snobs.

With this new album, CHVRCHES certainly makes a significant statement regarding the future of their music. And it’s not just the hit singles that define the album, each track has a significant voice and role in the impact of the album. “The Bones Of What You Believe” is a redefinition of synth pop, an exciting one at that.