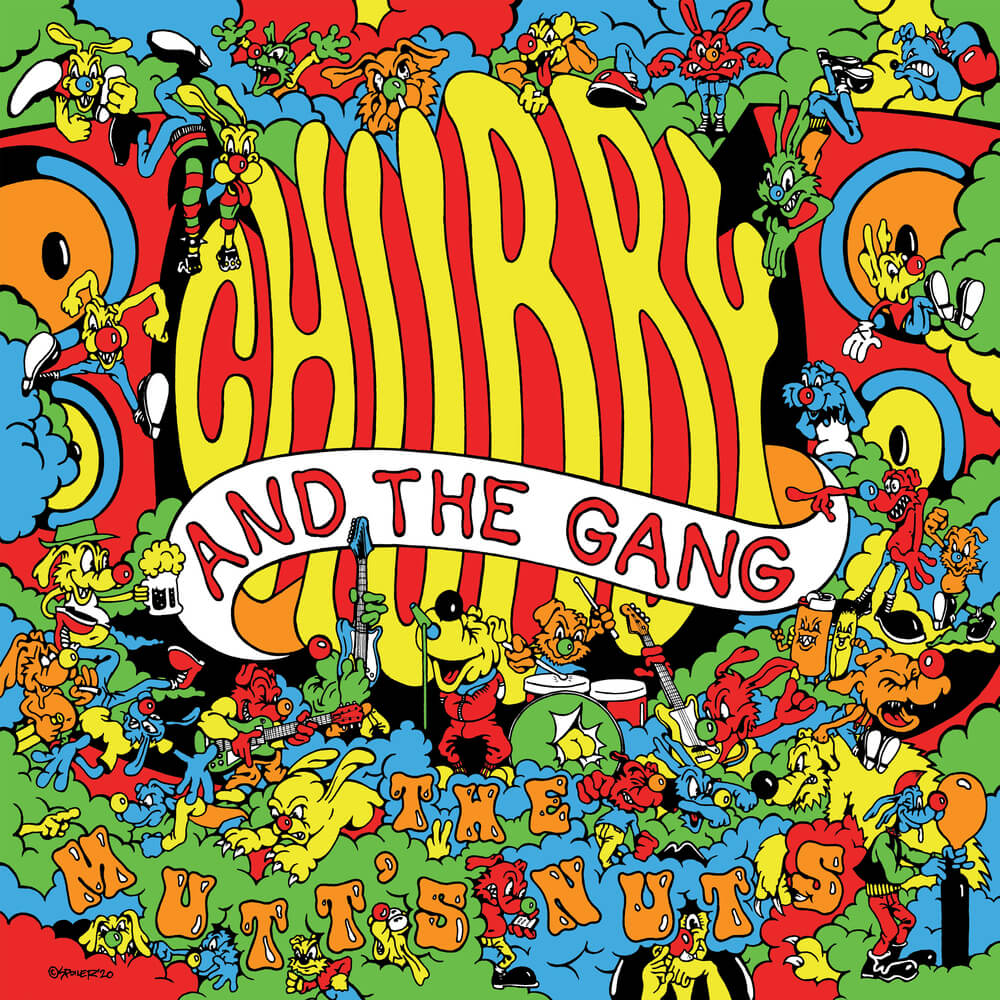 Chubby and the Gang

Whether it’s their own brand of Oi! Punk, mixed with 1950s pop and a smattering of classic rock, or lead singer Charles “Chubby Charles” Manning-Walker’s bolshie vocals, it’s hard to deny Chubby and the Gang’s innate Englishness. This is typified by the group’s sophomore LP and its distinctive moniker ‘The Mutt’s Nuts’. For the non-Anglophiles among us, this saying is derived from ‘the dog’s bollocks’, meaning to be the very best example of its kind. With a title such as this, it’s no surprise the London five piece attack their new release (following on from 2020’s debut LP ‘Speed Kills’) with a cocksure (yes that is a cheap pun…!) attitude, albeit one that’s shaded with a tinge of vulnerability and disillusionment.

For the most part ‘The Mutt’s Nuts’ is a 100mph riot of rollicking drums, razor sharp riffs and Manning-Walker’s bovver-boy tones. There’s a breathlessness to the quintet’s new album, as the Gang smash through track after track at a freakish pace. The record’s gnarled energy works as a vehicle for themes such as inequality, workers’ rights, police brutality, gentrification and government failure. ‘White Rags’ is a slow grind that almost swerves into blues territory as it saunters with a dark menace. Seemingly the song’s modus operandi is tackling the topic of civil unrest and the recent Black Lives Matter marches “the world is burning/Minneapolis too/it was set alight by the boys in blue/white knights marching in their ranks/putting children in body bags”. ‘It’s Me Who’ll Pay’, a song that straddles garage rock and punk, centres its narrative around the struggles of day to day work and the frustration that comes with it “if time is money/it’s me who’ll pay” snarls Manning-Walker with all the bile of someone’s who’s had their fill of bullshit jobs. ‘Coming Up Tough’ offers a brief window in Chubby and the Gang’s surroundings, as the band’s vocalist declares “this place is worse than hell” over a wave of rattling drums and discordant guitar.

Among the frantic blasts of punk ‘n’ roll, there’s the occasional diversion into Chubby and the Gang’s tender side, as the usual bombast is stripped back, like on ‘Take Me Home to London’. A lonesome romantic shimmer coats Manning-Walker’s aching vocals (that are sung, instead of shouted), as an isolated acoustic guitar sparkles in the background. Later into the album ‘Life’s Lemon’s adopts an almost lounge-pop demeanour. A heartfelt aesthetic envelopes the whole track as our gang leader croons about “love and devotion/as deep as the ocean”. An organ trill applies the rubberstamp to the song’s vintage feel. Album closer ‘I Hate The Radio’ closes off the record with a sound lodged somewhere between pop, rock and punk (sorry, this is such a lazy comparison but there’s something Clash-esque about this track, even down to Manning-Walker’s Joe Strummer-esque sung/spoken husked drawl). The band’s leader cuts a forlorn figure on a track that takes its influence from “when you finish a relationship with someone but you have a certain association between them and a song, and then that song comes on the radio, it’s like ‘man, I never want to hear this song again!” Happy to bear his soul, the band’s mouthpiece openly declares his sorrow multiple times with “hello heartbreak my old friend/it’s been a while since I’ve seen your face” exemplifying the hurt the singer is experiencing.

If it wasn’t for the occasional side step into different sonic styles ‘The Mutts Nuts’ could be a little one dimensional but thankfully Chubby and the Gang are happy to explore different soundscapes while staying true to their core influences. Not quite the big ball swinging LP the Londoners would want it to be but even so, it’s got some decent sized cojones on it.

order The Mutt’s Nuts by Chubby and the Gang HERE