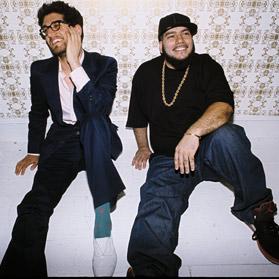 Following last week’s advance album trailer, a joyride through the desert, by Surface 2 Air, starring one bride, two grooms (Chromeo‘s Dave 1 and P-Thugg) and a 1987 Camaro, Montreal’s  funkmasters unleash the full version of the clip’s music: Over Your Shoulder, the first new Chromeo song in three years! This produced slice of Cana-disco serves as an ode to feminine self confidence and empowerment, with Dave 1 crooning: “it’s those little imperfections that make beauty in my eyes/ I want to be in the intersection of your thighs/ and you worry about your size it’s nonsense/ it’s not a contest and besides, if it was a contest you’d win it…” It’s quirky, it’s genuine, it’s outlandish and straight faced all at once…suffice to say, Chromeo is back!

Chromeo will soon take on intimate venues in New York, London and Manchester for some live shows. With Dave on guitar and Pee on his now infamous talkbox, both singing some of their newest tracks. In addition, Dave 1 & P-Thugg have collaborated with Tumblr and installation artists on the rise, Snarkitecture, to present a one night only pop-up installation in NYC.  More details to be revealed later this week via Chromeo’s Tumblr.