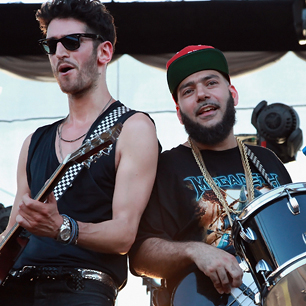 New York’s resident funkateers made the TV debut for their newest single, “Sexy Socialite”, off their fourth studio album, White Women, coming in 2014.  Backed by indie-rock gods Death From Above 1979 and a full gospel choir, Dave 1, P-Thugg and their notorious two-legged keyboard stands graced the airwaves with a live version of the song that brought the audience to their feet.  Chromeo caused a stir earlier this fall with “Over Your Shoulder”, first heard in an epic album trailer, created by Surface 2 Air, which featured Dave 1 and P-Thugg as grooms, one beautiful bride and a 1987 Camaro flying through the desert.