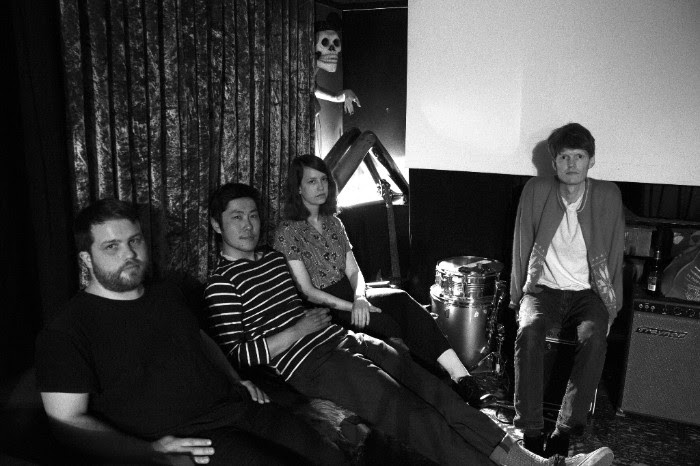 Brave Radar are a Montreal-based band led by Tessa Smith and Conor Prendergast. Since 2008 the pair have been releasing pop music under the name on Fixture Records, a label they run out of their apartment that has been responsible for some of the earliest releases from Homeshake, Dirty Beaches, Sheer Agony and Freelove Fenner. A mainstay of the city’s thriving but often under-publicized community of esoteric guitar pop bands, the band have played with acts like Mac DeMarco, Slim Twig and US Girls.

Lion Head, their forthcoming LP, which is streaming now on Chart Attack and Bandcamp, is a characteristically sibylline distillation of the sound they have been crafting over their previous releases. Recorded at The Bottle Garden, Freelove Fenner’s all-analog studio, the album belies it’s minimalist approach, weaving a multi-referential tapestry that is centered by a glacial, Broadcast-esque restraint, even as it draws in the influence of 60s psychedelia, the film scores of composer Ennio Morricone, and the artier ends of early 80s new wave. According to Prendergrast the album constitutes a significant step forward for the band, displaying a maturation of their approach to recording encapsulated by a desire to make “bolder choices.”

“Finally putting an album out on vinyl is a big deal for us,” Prendergrast was recently quoted as saying. “It feels more like a real thing. So we wanted to do the medium justice by getting away from the laptop and recording in a studio to tape at the Bottle Garden. As well as improving fidelity considerably this also forced us to consider the songs more and prepare them ahead of recording, a pretty new approach for us. So the songs themselves are more thought out and structured at the same time as being a bit more loose in execution because of more live elements and less opportunity to edit minor details. Another big deal for us was finally recording with our long standing live band members Gabriel Ng and Andrew Forsythe. They play on about half the songs and definitely help to give the album a more dynamic and diverse feel. It was also just fun to play the songs with them.

We kept coming back to ‘Lion Head’ as a title while recording the album, with the idea being that it would inspire us to make bolder choices. It may be far from the boldest album we can make but Lion Head became a fitting symbol for the mood and ideas on the album. A floating specter kind of lion head (one that haunts a lonely retail worker in the title track). Inspiration for the lyrics came initially from illustrations from different periods, both dark and silly: Medieval illustrations (where lions and lion heads feature prominently). 1930’s american animation and editorial cartoons from the 1950’s. These starting points led us to lyrics about alchemists, fancy hotels in refurbished castles, future cars and fever dream board meetings among other things.”