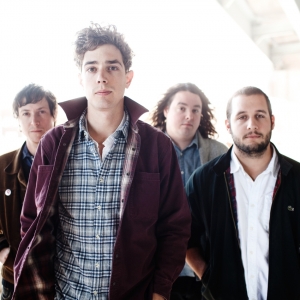 Born Ruffians have revealed a brand new video for Birthmarks‘ track “Permanent Hesitation”. The Toronto-based four-piece are currently on tour and have a massive homecoming show scheduled for November 22nd at the Danforth Music Hall in Toronto. Yesterday the band announced on twitter that fans will have an opportunity to get on stage and open the show.  Read about it here.

“Permanent Hesitation” was directed by Ron Eyal and Eleanor Burke using an 8-camera rig devised by Eyal, Burke, and Eric Lin. The multi-frame look of the video was inspired by artist David Hockney‘s “polaroid composite” portraits which stitch together multiple snapshots into a single mosaic image. “Permanent Hesitation” is the first music video shot simultaneously with eight video cameras to create a unified image. The crew used eight Canon 5D Mark III’s and custom-built rig which allowed each camera to be aimed independently. The motion graphics were created by designer and animator Kristyn Hume.

Born Ruffians released their third album, Birthmarks in Canada on April 16th on Paper Bag Records. The twelve-track album was written and demoed over the past three years and was produced by Roger Leavens at Boombox Sound in Toronto.