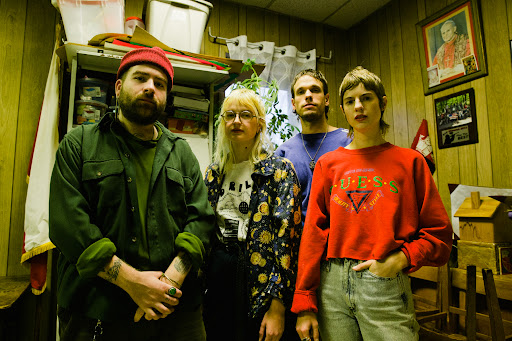 Empath’s forthcoming release Visitor, drops on Feb 11, 2022 via Fat Possum, the full-length was produced by Jacob Portrait (Unknown Mortal Orchestra), making it the first release the band has recorded with a producer in a formal studio. Empath recently wrapped a tour with Modest Mouse in the biggest rooms any of them have ever performed in.

Visitor attempts to fill space, both physical and psychic, visible and invisible. “The songs on Visitor talk about the ‘space’ between people. They’re not about specific people per se, but they illustrate the feelings people leave between each other, these subjective experiences. You can think of Visitor as a soundtrack to the memories and feelings that remain in places people have left behind,” Catherine Elicson reflects.

Inspired by the disquieting scores of Nosferatu (1922) and The Wicker Man (1973) alongside David Bowie’s Low and forever favorites Fleetwood Mac, Empath sought to one-up the range of sounds heard on their previous album. They included a series of samples on Visitor, all of which cohere to make the album sound as if it’s disrupting ambient noise. “Audio was taken from films, minecraft, a cassette of nature sounds from the Bayou, recordings of an air conditioner, and a church choir heard through the walls of the warehouse we rehearse in,” Elicson says. “It’s a collage of sounds intended to produce a feeling of hearing life through the walls.” Visitor attempts to bridge the space between. It’s an impossible task, surely, but the result of their efforts produces a transcendent experience all its own. Empath’s new album Visitor yet? Would love your thoughts on coverage for it. Out Feb 11 via Fat Possum.