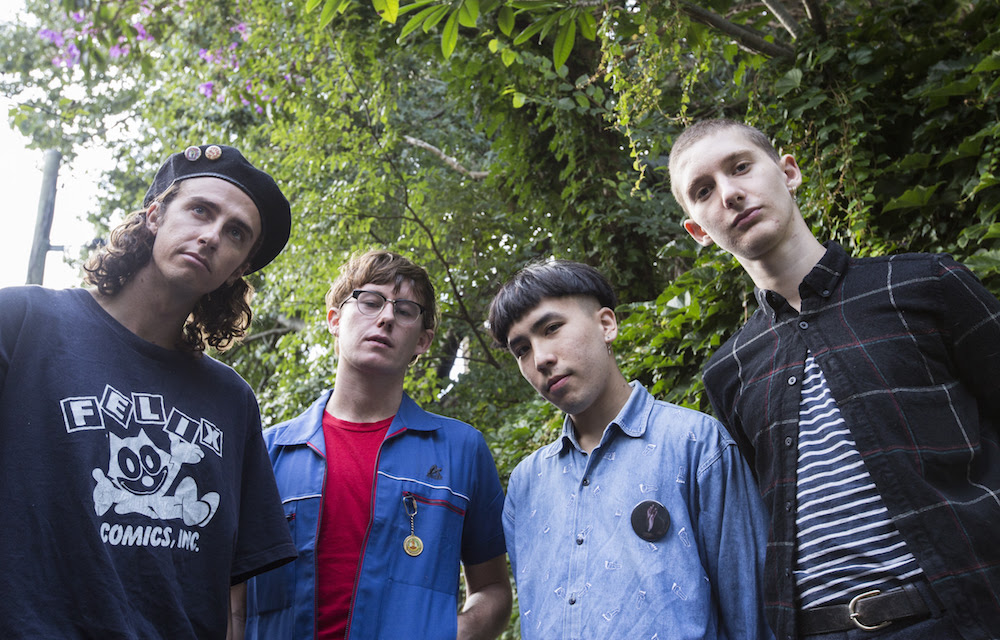 Australia’s Bleeding Knees Club have released the a video for their new single “Chew The Gum”, along with tour dates in May and June.

The clip pays homage to the ultimate getting-even fantasy – hiring a pro wrestler to beat up your bully! (Oh, and there’s a fair amount of gratuitous violence and pissing in it, too). Frontman Alex Wall reveals, “Everyone can relate to wanting to get revenge. And some can relate to getting pissed on. So I thought I’d make a clip about a kid getting revenge on a guy that pissed on him. A few years back I met a wrestler who said he’d be keen to be in a video, so the time finally came to take him up on it. I thought it’d be cool if you could hire a wrestler to do your dirty work, and get vengeance for you.” “Chew The Gum” is the title track of Bleeding Knees Club’s forthcoming release, which the boys will release throughout May and June.

The 4-song EP was produced by long-time friend (and fan) John Patterson from The Grates, who confesses “Since the first Bleeding Knees Club release, I could tell Alex was someone who was willing to wear his heart on his sleeve and had songwriting in his blood. Dude can’t write a bad song!”

Bleeding Knees Club’s debut album Nothing To Do was recorded in New York with producer Dev Hynes (Blood Orange). A raw and urgent set of songs about girls, getting high, and sticking it to The Man.

In its wake Bleeding Knees Club notched up an enviable list of shows worldwide with the likes of Wavves, Best Coast, The Vines, Black Lips, OFF! and more. They played the UK’s Great Escape Festival, and both CMJ and South By Southwest in the USA. At home they blitzed the Big Day Out, Homebake, Splendour In The Grass and Falls festivals, as well as stressing-out security guards nationwide on their 2012 run of chaotic Call The Cops shows with best buds DZ Deathrays and Yacht Club DJ’s.

Taking some time out from BKC since, frontman Alex Wall has spent the intervening few years living between New York, Los Angeles and the Gold Coast, while releasing three albums on LA’s Burger Records and touring worldwide as his sci-fi punk solo project Wax Witches. Now based back in Australia, he’s diving head-first into a mountain of Bleeding Knees Club songs he’s been stockpiling the past few years, as well as revisiting all their trademark anthems. Co-founder Jordan Malane has decided to step back from BKC duties, so please high-five the new line-up of Michael Barker (guitar), Gio Ronaldo (bass) and Nick Leighton (drums), and make them feel welcome.

Alex reveals “‘Chew The Gum’ is one of the first songs I wrote after returning to Australia, and it instantly felt like Bleeding Knees Club. It’s about over-doing things that are fun, to the point that it’s not fun at all anymore. Chewing the gum till there’s no flavour left, and it just tastes gross”.

John Patterson’s musical partner in The Grates (and wife) Patience Hodgson says, “Alex Wall is an A+ songwriter and an A+ human. Like a diary, his words are candid and so truthful you almost blush. All this reflection is set off by epic guitars, alongside untamed bass and drums. Like 18 year-old guys at the bus stop drinking choccie milk and wearing Lynx, everything together creates an energy that feels young and classic at the same time”.

For their new EP Bleeding Knees Club have just signed to Australia’s largest independent record company Inertia Music, and are the first act to do so under the company’s newly-inked worldwide deal with [PIAS]. Inertia founder and head of A&R Justin Cosby says “Alex has come full circle with what he’s written and recorded here on ‘Chew The Gum’. We can’t wait for you to hear this, and what he’s still holding in the bag for later.”

Sat 13th May – HOBART – Waratah Hotel
Supported by Skate Wounds and A. Swayze & The Ghosts