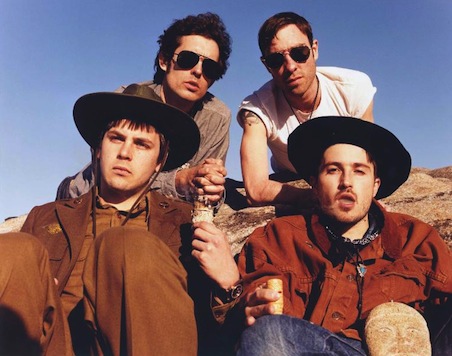 Black Lips have just announced their intention to dominate the 2013 chapter of Austin’s definitive SXSW Music Festival, immediately followed by a run of dates throughout California, marking their first extensive tour in the area in well over a year.

While the tour promises to be as frenzied and frenetic as the band’s rabid US fanbase have come to expect, it will be a return to safer territory for the band, who recently wrapped up a trailblazing tour of the Middle East including shows in Lebanon, Egypt, United Arab Emirates, Cyprus, and more. VICE’s music channel Noisey sent a camera crew with the band to document the unpredictable results of their international journey of rock diplomacy. The resulting 10 minute clip surfaced on their website today (spoiler: kids in the Mideast like fun rock music, too).

Additionally Bill Cody, documentary filmmaker and friend of the Black Lips, also travelled with the band overseas and is presently working on an independently produced feature length film. A brief trailer for that project, along with info on how Black Lips fans can help contribute, can be viewed below.