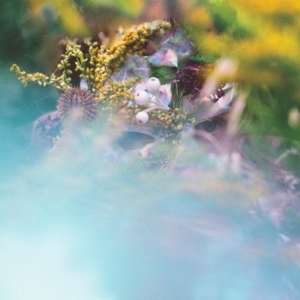 bEEdEEgEE is the performing alias of Brian DeGraw, an American artist, musician, and producer, who lives and works between the inner city and the Catskill region of New York state. Most commonly known in the music world for his work at the centre of Gang Gang Dance and their musical mastery, SUM/ONE is his debut record as a solo artist.

Written and recorded over the course of a year in his Woodstock studio, W0RMB1N, SUM/ONE initially began life when Brian left New York City – his home for the past twelve years – for the clouds of Woodstock. Amidst the peace of this new environment, the audio sketches he worked on gradually evolved into a project that fuses deep synth soundscapes with audacious pop moments.

bEEdEEgEE will be playing his first live show in New York on November 30th, after which he’ll support Animal Collective on their North American winter tour.

Brian Degraw’s name is synonymous with the never ending party that is the NYC that includes, amongst its many guests: the poets, freaks, composers, jazz musicians, rock bands, DJ’s, abstract expressionists and dancers that have come before and will continue to arrive, looking for the party, after we are long gone. In this tradition Brian’s work encompasses an outlook, informed by their visions of heaven and hell, as vibrant as the city’s art and cultural history. Of course, like at any party, there will always be those that overstay their welcome (and so complain that it his grown boring), get the wrong address or neglect to bring a bottle or contribute something of their own. It’s a tough call to know what to bring to the greatest party in the world (NYC in neon as photographed by William Klein), when so much has already been given and people will keep arriving to see what’s has not been taken or ransacked already. Brian’s gifts have been both generous and numerous and for this reason NYC has made him one of theirs to be remembered in the future and cherished whilst he is still here.

Brian arrived in NYC fresh from the break up of his first band the Cranium, a freeform post punk blast from out of space and Washington DC, who’s limited recording output was dwarfed by the influence of their live performances. From his arrival Brian was always looking for new ways he could contribute to the great party; these gifts took many forms, from his positive outlook that inspired those around him to his limitless energy on a skateboard to the throwaway drawings he would make on the back of napkins to the more ambitious painting, experimental films and journeys in sound that included collaborations such as Saab Songs (with filmmaker Harmony Korrine), Angelblood (featuring artist Rita Ackerman) and Death and Dying whose jams would evolve into Gang Gang Dance.

I first met Brian in a public house shortly after he had been released from a police station after drunkenly throwing a bike through the window of a Virgin Megastore on Oxford Street in London where I live. Maybe this wasn’t his greatest piece of work but he would not be put off either. He was with the artist Oliver Payne who explained that Brian was in a band but it wasn’t really a band in the normal sense of the word. Later during that same stay I watched him abandon a miscalculated Gang Gang performance that had ground to a frustrating stalemate with the soundman and continue, undeterred, with the aid of only a pair of drum sticks in the alley behind the venue in the pouring English rain. Later Brian would score the soundtrack to Oliver Payne and Nick Relph’s film ‘Sonic the Warhol’ which had the affect of sounding like an imagined meeting between Aphex Twin, a Sega games console and Mahler’s 9th.

The next time I went to New York Oliver took me to Brian’s new Sunday club night, a Smiths tribute night. Personally, being English I couldn’t see the point and when I arrived it was completely empty. In fact apart from later in the evening they didn’t even play the Smiths. Apparently that was the whole point though and later when it did fill out with Brian’s friends (and he did play some Smiths) I recognized the other people from the same party I had once come to New York, from a small English town, looking for; the poets, artists, models, skateboarders, painters, freaks, the psychedelic mashmen. Less than a year later when Brian did not play the Smiths there was a queue of visitors demanding their ‘admission’ fee back if he did not comply with them. Often their complaints would take the form of the coloured post it notes that Brian, well versed into turning adversity on its head, would later turn them into art for his first solo exhibition.

It has not always been easy and looking back I like to think that some of these struggles have made him a better artist. There have been deaths of loved ones, destruction, poverty and people ‘borrowing’ his ideas to enjoy the quick fix of ‘success’ themselves but instead of working against him Brian has managed to retain a curious child like view of creation. Surviving with a sense of dignity and not throwing down your tools and storming out declaring, That’s It, is a tricky proposition for many of us. Often it’s a bit like natural selection and the oomph and imagination you need to remain undeterred after you have watched another missed opportunity or, in one case, all his band’s equipment (including the tapes to their album) go up in smoke is what will make you a better artist. I have a belief that a writer or artist’s better work will only come after the point when any sane person would have called it a night. Today the same Virgin Megastore has long been closed down but Brian is still creating new and exciting work.