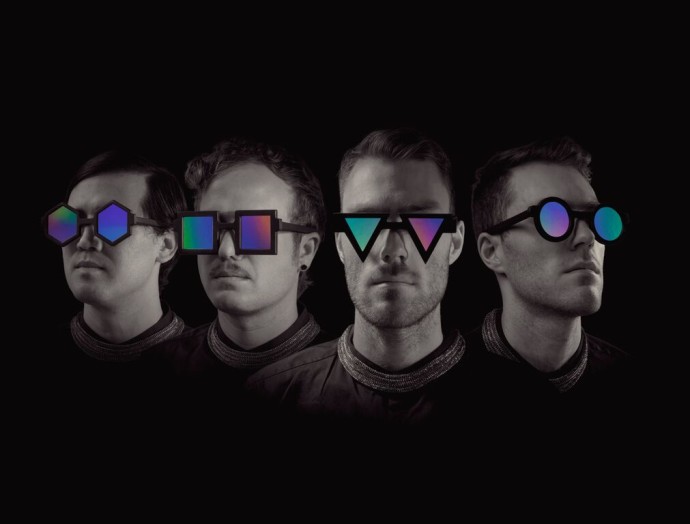 Bear Mountain has revealed a new video for Hopeful, from their sophomore album, due in early 2016 on Last Gang Records. The video, which was directed by Ben Gulliver, is available to share now via YouTube. The group will perform at Toronto’s Adelaide Hall on December 10th, with $1 from every ticket sold being donated to the Daily Bread Food Bank (details below).

Bear Mountain’s Ian Bevis says, “We made this video wanting to create an interaction between music and visuals in a real space. With the help of a creative team we were able to sync the music with the lights and visuals, and really connect the song with physical objects and visual projections. The song itself started with the chopped vocal sample in the chorus, and we built the music around that. We hope you like it.” The track premiered last month and is available now to download on iTunes and stream at Spotify.

Earlier this fall, the band revealed two remixes of Hopeful. Of Swim Good’s remix of the song, Bear Mountain’s Ian Bevis said “When we wrote the song, we were thinking of being young, and being so hopeful for the future, but you can’t seem to escape the fact that you’re always f*cking it up. We were on, we were off, we were young, we were lost, we were so close to classic—hopeful but tragic.” Future Classics premiered Moon Bounce’s take on the track and said “‘Hopeful’ itself was made with the future in mind. And during times like these motivation points here and there are what is needed to keep ourselves from burying our heads in the sand. Especially on the subject of technology versus nature. This is where Philly based Moon Bounce comes in. Locking ‘Hopeful’ firmly into technology, groovily I might add, with a lush blend of Tropical/New Disco and plenty of Future.”

As human beings living in the digital age, interconnectivity is at the core of everything we do. Paradoxically, achieving a true sense of connection is often our greatest challenge. For Vancouver electro-dance band Bear Mountain, finding a way to seal the rift that exists between technology and the natural world has become a beacon that guides much of what they do.

Blending live instrumentation with fully immersive visual projections and lighting components, Bear Mountain (who take their name from Jack Kerouac’s 1958 novel The Dharma Bums) far surpass the parameters of a traditional indie band. While their rhythmic, vocally driven sound draws heavily upon a shared appreciation of house music and always keeps an ear to the dance floor, their atypical live show has been likened to performance art that seeks to awaken the senses and push the boundaries of the live experience indefinitely.

“This band, our music, Kenji’s artwork, and everything we do is really about unifying that relationship between technology and nature, analogue and digital,” says frontman Ian Bevis. “For us, there is something really stimulating about producing music and for the most part our songs are producer-based tracks. Where things get interesting is on stage when we translate those techniques into the live setting,” adds Kyle Statham. “When we’re up there we’re always rocking things out like a band usually would but we’re also bringing in this visual language and an element of storytelling, which takes shape in real time and in front of the audience.”

Over the course of past two years, Bear Mountain has taken their much talked about live show on the road across North America opening for acts like Bloc Party, Hot Chip, and Cut Copy, and performing at festivals such as The Governor’s Ball, Lollapalooza, Austin City Limits, and Sasquatch. The band is now currently hard at work on their sophomore album, which will be released in early 2016 on Last Gang Records.