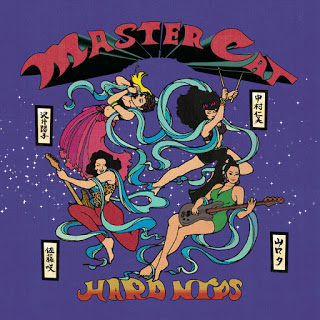 Brooklyn band Hard Nips is comprised of Gooch, Hitomi, and Yoko grew up in Japan and later moved to America. Saki grew up on Long Island. Each of the Nips came to live in New York at different times, from different parts of Japan. “Gooch is from Okinawa so she’s an island girl; Hitomi is from Nagano so she is a mountain girl; Yoko is from Osaka so she is a city girl; [I’m] from Long Island so [I’m] a suburban girl (at heart),” says guitarist Saki. “Alternative Dreamland” is off the band’s forthcoming release Master Cat, their first new music since 2017.

Singer and keyboardist Yoko ran a Japanese bar/restaurant in Brooklyn where bassist Gooch was a regular customer. The bar conveniently gave the girls a place to meet, unwind, and escape the English speaking world. They quickly formed a cult-member-like bond whose rituals all included drinking a lot of alcohol and uncontrollably running their mouths in some unintelligible language (some say it was Japanese). The wine flowed like Kool-aid and, somehow, they found themselves buying into the idea that they were capable of forming a kick-ass rock band.

“We collaborated on everything and everyone wrote their own parts but each song started out as a basic form usually from one of us,” explains Saki. “Gooch and I especially bring the initial flavor to the songs by writing the melodies/riffs: Gooch’s style is more groovy and funky with songs like “Master Cat,” “Alternative Dreamland,” and “Anaconda”; my style is more rocking and punk, with “Workaholic,” “Analog Guys” and “Motto.” Yoko and Gooch write the lyrics. Hitomi is a true professional and we can roughly describe what kind of beat we are thinking of and she will find it.”

Songs like the brooding, post-punk inflected “Alternative Dreamland” and “Motto” (Japanese for “more”) echo that theme of empowerment, breaking out of the mold and pushing yourself to be what you know you can be. “Master Cat”, the album’s title track tells the story of a sex worker roaming the halls of a hotel and owning it, shouting “Who do you think I am, a secret kitty service?” over a thunderous groove.