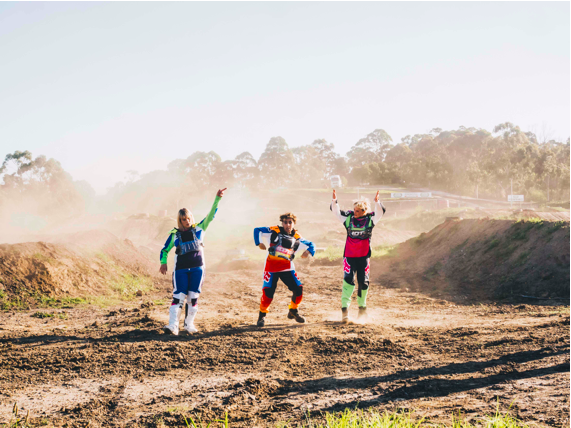 Australian producer Alice Ivy will release her new full-length Don’t Sleep on July 17 via Last Gang Records (Death From Above, Chromeo). Today, she has shared a video for the title track, featuring Imbi and BOI .

“Don’t Sleep is one of those songs that came out of nowhere! Imbi, Boi and I were in the studio on the last day of a songwriting camp (shoutout Ricochet!) and at the start of the session we were all feeling pretty burnt out. But something special happened between us and I think it had a lot to do with how inspired we were feeling after a week at an all-female/non-binary camp. We came up with a super powerful song and it’s definitely one of my favourite collabs I’ve ever been a part of. The lyric, “Our bodies are ours so keep your hands away” hits me every time I hear it. It’s an empowering song… so obviously I had to recruit a bunch of junior motocross riders to tear it up in the video!”

Between releases, Alice Ivy has grown into one of Australian electronica’s most prominent advocates for female producers, putting her in step with other tireless voices such as KUČKA and Grimes . Through her choice of collaborators, many of whom are female and non-binary, Alice Ivy is working to diversify the sound and look of the traditionally male-dominated studio space. Across Don’t Sleep features Thelma Plum, Ecca Vandal, Ngaiire, Benjamin Joseph of Safia, Odette, Bertie Blackman, Imbi and more.