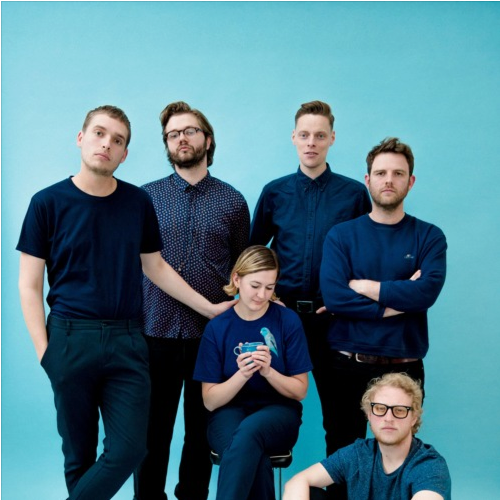 ALASKALASKA, the art-pop 6 piece from London, make groove-laden music that blends jazz, disco, funk and R&B into a bold and playful sound uniquely their own; synthetic beats play alongside live drums, delayed guitars and swirling saxophones to create something musically rich and delightfully intricate. Band leader and vocalist Lucinda twists brooding and introspective lyrics – akin to the words of Arthur Russell – into melodies reminiscent of Warpaint, Dirty Projectors or Talk Talk, which demand repeat listens and could as easily soundtrack an evening alone as they could a party. They’ve built a cult following and reputation as extraordinary performers through a handful of low-key London shows, and they’re heading out on a full UK / EU tour supporting Alvvays this August and September.

Today the band drop the video for album title-track “Bitter Winter” made by 17-year-olds Soren Harrison and Amir Hossain. Inspired by a brief to create something reflecting hours parked on the sofa watching WWF wrestling and basic satellite TV, the teenager duo’s first video sees the band transported from their living room to an amateur wrestling match between hero ‘Bitter Winter’ and villain ‘Slim Pickins’.

Lucinda had a few words to say about “Bitter Winter” and the accompanying video, “the song is about the internal battles you have with your psyche, knowing full well that you can’t win a battle against yourself. We wanted the video to incorporate some kind of fighting or footage of some sort of struggle and we could have gone down a much darker route but after meeting with Soren and Amir, we decided to try something a bit more playful. The excuse to dress up and get all our mates involved was too good to miss.”

Half of the directorial duo, Soren, also commented on the production, “this is the first ever music video we have created, an exciting experience that was both fun and intimidating.”