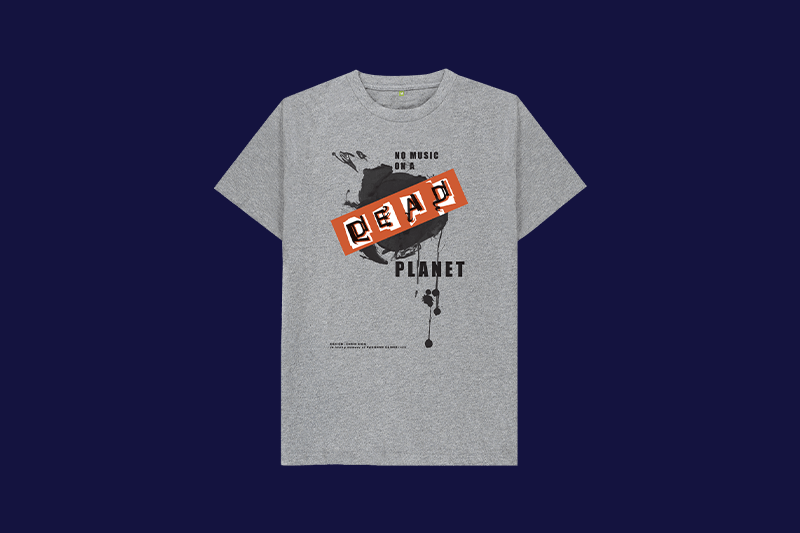 4AD and Music Declares Emergency launch new T-Shirt ahead of Earth Day 2022 For Earth Day 2022, 4AD and design collaborator Chris Bigg (v23)
Share on TwitterShare on PinterestShare on PocketShare on RedditShare on FacebookShare on Email

Available to order now for www.musicdeclares.shop, the new 4AD / v23 shirt is the latest design in a series that has seen celebrated designers and artists such as Peter Saville (Joy Division), Anthony Burrill, Thom Yorke &amp; Stanley Donwood (Radiohead) and Jamie
Reid (Sex Pistols) lend their support to the cause, all creating new designs around the charity’s ‘No Music On A Dead Planet’ rallying cry.

This new t-shirt has been designed by Chris Bigg, who in a distinguished 30-year career has worked on many renowned record sleeves for the likes of The Breeders, Cocteau Twins, Dead Can Dance, Aldous Harding, Lush, Pixies, David Sylvian and The Wolfgang Press.  For a long time, Chris was part of the v23 design house alongside visionary graphic designer Vaughan Oliver, the man who built 4AD’s visual identity and is now recognised as one of the most important graphic designers of his generation.

With Vaughan sadly passing away in late-2019, Chris is also dedicating this design in his memory.  Speaking of the project, Chris said “I&#39;m very honoured to be asked to contribute a design for such an essential cause.  When I was commissioned for this project, I felt I had to make a piece of work that related to our working relationship.  Having worked on Pixies’ ‘Bossanova’ planetary album art together, I thought that was an appropriate direction to go in.  All the work is created by hand, no computer! Dear Vaughan would have approved. Since Vaughan’s passing, I have dedicated all my work to his memory and this shirt is no exception.”

This t-shirt is timed not only to coincide with Earth Day but also the first anniversary of 4AD and parent company The Beggars Group pledging to become a carbon negative business. Working with Teemill, all Music Declares Emergency t-shirts are sustainably and ethically produced with each one printed-to-order so to avoid waste stock. They can also be returned at the end of their usage to be recycled in return for store credit. Each t-shirt sold raises money for Music Declares Emergency to support their work raising awareness of the climate emergency and to encourage government action on the climate and ecological crisis through music, the music industry and its audiences.